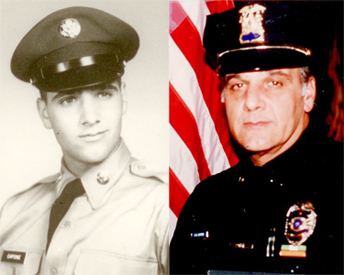 Augie was born in Watertown July 12, 1941, son of Augustine "Gus" and Anna L. Tarzia Capone and was a graduate of Immaculate Heart Academy.

He entered the US Army on September 22, 1960. He served with the Military Police in Germany and was honorably discharged on September 12, 1962.

He retired from the Watertown City Police Dept. in 1992 as a Sergeant and Juvenile Aid Officer with over 20 years of service to the city. His career put him in a Netflix documentary and he was mentioned in a novel. Augie was a communicant of both St. Anthony's and Holy Family Churches. He was a member and former vice president of the Police Benevolent Assoc. He enjoyed spending time with his family, Sunday sauce, coffee with his siblings, and time at the cottage on Sherwins Bay.

The family wishes to express their love and gratitude to his caregivers Penny Biccum, Debbie Baker, and Nicole Tubolino for their unconditional compassion and love for their father.

Calling hours will be held at Cummings Funeral Service, Inc., Watertown on Tuesday, September 28, from 4 - 7 PM. A prayer service will be at the funeral home on Wednesday, September 29, at 9 AM followed by the funeral mass celebrated at Holy Family Church at 10 AM. Burial will be in Glenwood Cemetery. Donations in his name may be made to the Sisters of St. Joseph, 1425 Washington St., and Hospice of Jefferson County, 1398 Gotham St., both in Watertown, NY 13601. Online condolences to Augie's family may be posted at www.cummingsfuneral.com.

12
#17 Bill Massaro 2021-10-06 21:40
I was sorry to hear this news. The Massaro family extends our thoughts and prayers to the Capone Family during this difficult time.

Report to administrator
#16 Thomas Flavin 2021-09-29 15:56
I met Augie at Army Basic Training at Ft. Dix NJ. He was one of three of us from Jefferson County. Myself, Augie, John Coleman, who I graduated from Sacred Heart school with, and Robert Cornell, from Adams area. We met and I found out he wanted to be an MP. John I think became a cook, Bob was a graphic draftsman, and stayed in the states. I also went to Germany; by troop ship. I was a communications specialist in an infantry unit. We both lived in interesting times, the Cuban missile crisis, with the troop recall and alert. plus the building of the wall around east Germany.
I also came back with a wife and my son.
Less we forget!
Thomas M. Flavin, SFC, USA Retired.
Report to administrator
#15 Terry Burgess 2021-09-27 22:19
I am very sorry to hear of Mr. Capone's passing. He was a very fine man. Prayers to Andy, Andrea, Aaron and the rest of the family
Report to administrator
#14 Karen Sandford 2021-09-27 17:47
So sorry so hear of Mr. Capone passing. I knew him through his rental property and he was always just a very kind, respectable man. My thoughts and prayers go out to his family and friends.
Report to administrator
#13 Anthony J Bova 2021-09-27 12:55
I am very sorry to hear about the passing of Augie Capone, he was a wonderful man and a distant cousin that I looked up to..... As a younger kid I spent several times at his Uncle Charlies store and remember him entering the Army and being stationed in Germany, I thought it was about the time that Elvis was there..... My sincere condolences goes out to hi children and family
Report to administrator
#12 Julie Sliwa 2021-09-27 11:24
I am so very very sorry to read of Angie's passing. He was such a good person. I am sending prayers to all of you for comfort with love...
Report to administrator
#11 Andy and Peggy Vinnenberg 2021-09-27 07:35
Andy and Peggy Vinnenberg wish to extend our condolences to the family of Augie Capone. We express our deepest sympathy for your loss. Please know that you are all in our thoughts and prayers.
Report to administrator
#10 Peter Tarzia 2021-09-26 20:43
To Augie's Family, I want to let you know he would bring into uncle Gus store and get me candy. I'll always remember that!! He had a great personality. I know he will be missed by many people. Our prayers go out to you at this difficult time.
Report to administrator
#9 Mary Empie Evans 2021-09-26 20:06
To Augie's family, I'm so sorry for your loss. I remember Augie from years past. Such a sweet man. My mom was Frances Capone, Frank's daughter. Keeping you all in my thoughts and prayers.
Report to administrator
#8 Paul Carbone 2021-09-26 10:38
Our sincerest heartfelt sentiments on the passing of your father. As you were our neighbors on Franklin Street we offer our prayers and thoughts as you go through this difficult time. May the Lord be with you.
Paul & Lydia Carbone
Report to administrator
12
Refresh comments list