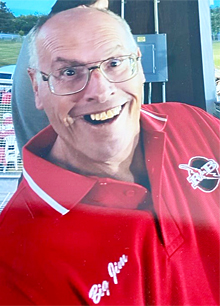 James E. McAuliffe III, age 71, passed away on October 4, 2021 at Hospice of Jefferson County after a brief battle with cancer. Several family members were by his side, including his beloved wife of thirty-one years, Michele McAuliffe.

Jim was born in Cambridge, Massachusetts on April 8th, 1950. He was the oldest child of James Jr. and Patricia McAuliffe, helping to care for what would eventually become a family of 7 children. Jim was initially raised in the Boston area until the McAuliffe family relocated to Dayton, Ohio and then finally to Watertown in 1964. He attended Watertown City schools, graduating from Watertown High School in 1968. Jim then attended the University of Dayton, where he played collegiate football after earning a walk-on position on the university's team. He returned to the Watertown area after graduating from Dayton in 1972 and married Catherine Whitman. That marriage resulted in the birth of his daughter, Christine (Chris to Jim) and ended in divorce in the early 1980s.

Jim married Michele Pearson Curtis on November 2, 1990 after meeting her out walking in Watertown the previous year. Jim and Michele shared many activities, including their mutual strong belief in the Catholic faith; wanting to be outside on their deck and enjoy nice weather; biking or walking as much as possible throughout Watertown; and playing with the numerous cats that they have had over the years. Jim also enjoyed introducing Michele to his life-long love of the Maine seacoast and walking on the beach. He had visited the seacoast every year as a child with his family and continued this tradition by often going twice a year to Wells Beach, Maine with Michele.

Jim was also a devoted sports fan, a characteristic he shared with his mother, Patricia. He enjoyed watching University of Dayton football, Syracuse University basketball, St. Lawrence University ice hockey, Yankees and Cincinnati Reds baseball. Jim also had an extensive career refereeing and umpiring games, matches and meets in volleyball, swimming, basketball, baseball, softball, and other sports for a multitude of local school districts. He also refereed and organized numerous recreational sports and leagues for soldiers at Fort Drum. Jim was also involved with Watertown's Red & Black, acting as a scorekeeper and providing other refereeing services.

During his life, Jim was a faithful communicant of Holy Family Church. On October 9, 2021, the family will have a private funeral mass there along with calling hours for the family at Cummings Funeral Service, Inc., Watertown. Burial will be completed at Glenwood Cemetery the same day. Online condolences for Jim's family may be shared at www.cummingsfuneral.com.

12
#11 Keith Rose 2021-10-09 06:48
Jim always brought a smile to the faces around him. He will live on through that memory. May he rest in piece. I played high school football and worked with Jim at Sears in the early 70's.
Report to administrator
#10 Barb Lindsey 2021-10-08 13:47
Most heartfelt condolences to Michele and family. You’re in my prayers. Big Jim will always be remembered with a great smile & a referee shirt. Big bear hug Jim...RIP.
Report to administrator
#9 Jane Bowman 2021-10-08 13:19
We were so sorry to hear of Big Jim’s passing. Always enjoyed talking to him when he came into Jean’s Beans.
Report to administrator
#8 John Keenan 2021-10-08 12:33
So sorry to hear of "Bud's" passing. I 1st met him ages ago, as our 1st 'paperboy', and would run across him off and on ever since, when he was out walking. He always had a happy smile on his face, and an interesting comment or two, as well. Condolences to his family and friends.
Report to administrator
#7 Frank Romano 2021-10-08 10:56
To the family of Big Jim, my prayers and thoughts are with you. I knew Jim for many years, he officiated many sports events at Ft Drum. He touched the lives of many soldiers. He will be missed. God bless, may he rest in peace.
Report to administrator
#6 Phil marra 2021-10-08 10:10
Jim was one of the nicest person I ever met. Working with him at baseball games as umpires was so relaxing and enjoy able.i learned alot from the experience pro of this game. I am sadin from this difficult time a great person. We always laughed to each other and said I saved your ass on different baseball calls. He was such a person of laughter and smiles I will miss him knowing working without him is going to be tough but remember him what he has taught me RIP a great loss to our community.
Report to administrator
#5 Mark Pearson 2021-10-08 05:16
With deepest sympathy to my sister on Jim’s passing. All though we did not know Jim well, we did have a few summer visits to the area to see my sister and him. God bless and thinking of Michele- sending prayers
Report to administrator
#4 Timothy Austin 2021-10-07 22:28
Brian and Luann - tragically, here again and far too soon we learn of yet another loss your family has suffered. Words fail me at such a time. You have my very deepest sympathy at this difficult time.
Report to administrator
#3 Elizabeth Daugherty 2021-10-07 19:45
To Jim's Family, you are all in my prayers. I know that your obituary is so JIM. It describes him to a tee. I remember him walking and talking to just about everyone. Just seeing him walk was knowledge that the world was good that day!
Report to administrator
#2 Brenda Prance 2021-10-07 16:19
With deepest sympathy. We are so sorry to hear about the passing of Jim. He is was great guy and will be dearly missed. Thinking of you Michele. Sending prayers to you during this time.