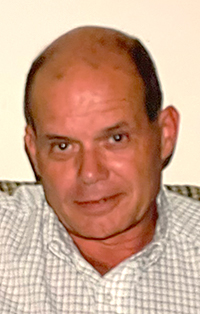 Stephen Lee Rich passed away peacefully at Samaritan Medical Center on January 8, 2022 with his loving wife Catherine and favorite daughter Tricia at his side. Steve married Catherine “Caye” Mary (Spicer) in Our Lady of the Sacred Heart Church on May 9, 1964. For 58 years, Caye never left his side and always maintained the loving perspective of a faithful wife, and willing caregiver in his last years.

Steve was a devoted father and husband, avid outdoorsman, tinkerer and fixer-of-all-things-broken, and untiring jokester. He retired from the banking industry in 1995, after which he worked in real estate for several years. More at home in his home, his greatest satisfaction from in his work life derived from friendships he made with co-workers and opportunities he afforded to homeowners seeking financing for their homes. Even at his 80th birthday party one could hear remarks like, “Steve was the greatest boss ever.”

Steve was a soft-spoken man of few words, but his deeds and actions manifest who he was and provided valuable life lessons that his children learned well. He was schooled in the early years in a one-room schoolhouse. He later went to Saratoga High School where he excelled on the football field. He was also a track star and, at last notice, he still held a record for some events at General Brown High School.

After high school, Steve enlisted in the Navy. He served two years in active duty on the USS Wasp, and eventually joined Jefferson County Savings bank as an auditor, where he stayed for 35 years, saw numerous mergers and name changes, earned an Associate’s degree from Brown University, and eventually retired in 1995 as Vice President of Chase Manhattan Bank. He also served for 40 years as a councilman for the Town of Watertown Council, was appointed to the Tug Hill Commission by Governor Mario Cuomo, was a member of the Lions’ Club, past President of the Watertown Sportsmens’ Club and President of the Watertown Hockey Association.

Together with his wife Caye, he built a home for his loving and loved family. Swimming pools, mini-bikes, treehouses and animals (tons of animals!) brought the family (and neighborhood friends) endless hours of happiness and joy. Steve and Caye acquired their first Labrador retriever before the birth of their first child and they would go on to raise dozens of litters for friends across the country. He leaves behind Sailor and Ginger, the latest in the long chain of Labrador friends who now look for another lap to sit upon.

Steve was a devoted son and brother. Steve joins his father Donald, mother Hazel, and sister Theta Corliss in peaceful respite of the hereafter. He especially doted on his mother Hazel. There is one story known to all his children about the time Hazel accidentally filled the sugar bowl with salt. Steve took two teaspoons in his coffee and learned of the mistake shortly thereafter. He dutifully downed the beverage and never told Hazel so as not to upset her. Now that they are together again, she’ll know the truth and together they will surely be chuckling about it under Donald’s watchful eye.

He is also survived by his three sons, Stephen Matthew (Adriana), Amherst, MA, Shawn Michael (Karen) Sturbridge, MA, and Brian David (Meghan), West Hartford, CT, and his daughter Tricia Lynn Ledoux (Michael), Watertown, as well as by his ten grandchildren (Connor, Tadd, Isabel, Tori, Braeden, Stephen, Trey, Colin, Brendan, and Andrew). They knew him as Papa and sat on his lap until they were too big to do so, then later pushed his wheelchair as the Parkinson’s took away his walking legs. When any of his children or grandchildren came into sight, he would light up with a glint in his eye and smile on his face. He also had many nieces and nephews who remember him for his good humor, good looks, and playful spirit. Some of those nieces and nephews knew him as a surrogate father and a beloved uncle.

Family was everything to Steve, and while he had only one sister in life, he gained many brothers and sisters in marriage. Catherine’s brother’s Robert, David and Richard predeceased him. Brother-in-law David “Doc” Stabins and his wife Patti (Spicer) also predeceased Steve. He is survived by sister-in-laws Elizabeth Spicer, Syracuse and Mary Jane Spicer, Rochester, and his brother-in-law Everett Corliss, Dexter.

The family would like to thank his caregivers, particularly Lynn Hotis, who helped him during the final years of his life. Donations should be made in his name to the Northern New York Community Foundation, 131 Washington Street, Watertown, NY 13601. Calling hours will be held at Cummings Funeral Service, Inc., Watertown on Wednesday, January 12, from 5 - 7PM. The memorial mass will be celebrated at Holy Family Church on Thursday, January 13, at 10 AM. Burial will be in Glenwood Cemetery. Online condolences to Steve's family may be posted at www.cummingsfuneral.com.