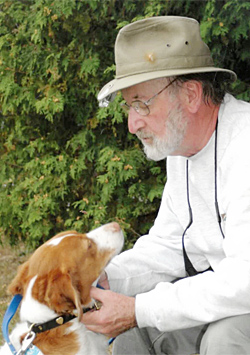 Dawson Allen, of Watertown, beloved father, grandfather, and great grandfather, passed away peacefully on January 15, 2022. He was 93 years old.

Dawson was born in Ballyskeagh, Northern Ireland, to Wilfred and Elizabeth Allen. He attended Belfast City Hospital School of Nursing, where he met his wife, Margaret. Together they had four children: Paul, Peter, David, and Michele.

Dawson was a man of God whose life was deeply enriched through studying the Bible and teaching others from the scriptures. Through all his life, he believed with all his heart "That if thou shalt confess with thy mouth the Lord Jesus, and shalt believe in thine heart that God hath raised him from the dead, thou shalt be saved." Romans 10:9

In 1963, Dawson immigrated with his family to America via Canada. Since leaving Northern Ireland, his profession took him to many places before settling in Watertown, New York. During his career, he worked at the Mayo Clinic in Minnesota, and the Washington Hospital Center in Washington D.C. Dawson retired from the North Country Orthopedic Group in 2008.

For a fly fisherman who tied his own flies, the North Country provided an endless stream of experiences and inspiration for Dawson's hobbies. These included gardening, painting, sled dog racing, and grouse hunting with his dog Maggie.

Dawson will be lovingly remembered by Magaret, his wife of 70 years, his four children and their spouses, his greatest treasure --12 grandchildren and 23 great-grandchildren, and his sister, Margaret Phenix. His three sisters, Evelyn, Dorothy, and Madeline, died before him.

Calling hours will be held on Wednesday, January 19, at Cummings Funeral Service, Inc., Watertown from 5 - 8 PM. The funeral will be held at Agape House Fellowship, 36085 NYS Rt. 180, LaFargeville on Thursday, January 20, at 11 AM. Burial in Brookside Cemetery will be in the spring. In lieu of flowers donations in Dawson's name may be made to SPCA of Jefferson County, PO Box 531, Watertown, NY 13601. Online condolences to his family may be posted at www.cummingsfuneral.com.

12
#18 Bruce Baird 2022-02-13 22:36
It was a privilege to work with Dawson at the North Country Orthopaedic Group. We are sorry for your loss.
Report to administrator
#17 Cecil and Joan Scott 2022-01-20 12:43
Our deepest sympathy to Aunt Margaret, Paul, David, Peter and Michelle and their families on the home call of dear Uncle Dawson. We send our love to them especially today.
With deepest love. Cecil Joan, Colin, Lynsey Harrison, Belfast, N.I
Report to administrator
#16 Hope Marston 2022-01-20 09:05
Arthur and I were blessed to meet Dawson and Margaret many years ago, probably through a Bible Study. We had deep respect for them. Now, he is finally home with the Lord he loved and served so faithfully. Our trust in the Lord... We'll see him in heaven again in the Lord's perfect timing.
Report to administrator
#15 Linya Bell 2022-01-19 18:29
It was a pleasure to know and to listen to Dawson in Bible studies. He had a direct manner of speech with a lovely brogue, and gentle voice. Though I knew him after his retirement, I can imagine he was also a great help in the medical field. He is missed.
Report to administrator
#14 REG JONES 2022-01-18 11:15
I have fond memories of "Uncle Dawson" from 1955 in Thunder Bay, Ontario when they immigrated. With the Wagars from Southern Ontario, the 3 families became our "relatives" growing up. It was a wonderful time.
Uncle Dawson was fun and funny. He organized the best Halloween parties. Our families shared adventures to several Provincial Parks - one included black-fly sandwiches - they were so bad that day. He took me fishing my first time, with Paul and Peter to Cloud Bay. I remember his teaching and his love for his 4 kids. He was so warm and caring to all of us.
We kept in touch a bit over the years - talked over the past few years. Blessed to have had him in my early life.
My condolences to Aunt Margaret, Paul, Peter, David and Michele. May you celebrate his long and well-lived life, even as you mourn. Jesus has welcomed him to a place prepared!
Report to administrator
#13 Wanda Anderson 2022-01-18 05:46
Dawson will be missed by us all. He has left a living legacy of lives touched and changed through his willingness to serve wherever planted by the Lord. I have been blessed by his encouragement on many an occasion. May you find comfort in knowing this is not a final goodbye. We shall see him again.
Report to administrator
#12 Vernalice Merritt 2022-01-18 01:29
My prayers are with you and family. So sorry for you loss.

Vern (WSSC
Report to administrator
#11 Karin Cronk 2022-01-17 22:09
Dear Margaret and the entire Allen family, I was so saddened to hear of Dawson's death. What an amazing man, always so kind and generous.
My heart goes out to each of you.
My sincerest condolences, he will truly be missed.❤
Report to administrator
#10 Judy Fiorentino 2022-01-17 21:38
Margaret and family, I worked for many years with Dawson at CREG Systems. He always had a smile and very warm greeting for everyone. He was a gentle soul, thoughtful, and kind. I have thought of him often over the years and am sorry for your loss. My thoughts and prayers are with you all.
Report to administrator
#9 Beverly A. Shepard 2022-01-17 20:21
To Margaret and family, I knew Dawson when he worked at Mercy and again when he worked at the Orthopedic group. He was an extraordinary person, always so interested in what was going on in your life and a wonderful example of what a truly great person is. He always greeted you with a smile and a bit of Irish humor, intensified by his brogue.
Report to administrator
12
Refresh comments list