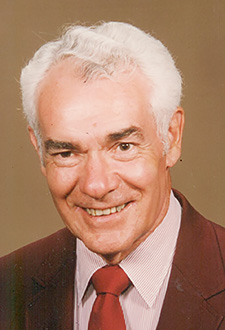 Glenn was born in Westport, NY May 29, 1930, son of Aubrey G. and Amy Curran Gough. He was a graduate of Westport Central High School and the School of Radio Technique, Radio City. He served in the US Army from February 7, 1951 to February 7, 1953.

Glenn was a kind, loving. patient, and gentle man. He took great pleasure in meeting prople and listening to their stories. Gough was an iconic Watertown broadcaster and local TV celebrity, well known in this region as well as along the Canadian border. He had a distinguished career in television and public broadcasting. He was the Director of Programming for WPBS TV for 12 years. He particularly enjoyed hosting his own television shows, the North Country Sportsman and Cabin Country on Channel 7, Watertown's WWNY. Glenn covered hunting, fishing, and conservation on the program that aired over 700 episodes. He also moderated the Whiz Quiz, a game show for North Country high schoolers covering 32 districts. The Whiz Quiz is a salute to academic excellence of regional students aired on WPBS. The station created the Glenn Gough Championship Trophy to honor his 40 years hosting the show in 2020.

After retiring Glenn and Maureen traveled extensively. He created beautiful photo albums describing their travels, people they met and experiences they shared. The couple enjoyed socializing with many local friends. He played in the Mens Golf League at the Watertown Golf Club and enjoyed hunting with his good friend Duane Chalk. Gough was an avid gardener who planted beautiful rose and flower gardens. He was a communicant of Holy Family Church. He was a member of the American Legion Post 61 and the Jimmy Creek Club where he achieved honorary staus which exempted him from cooking duties.

Along with his wife, Maureen, he is survived by his son Steven Gough, Guilderland; three step daughters, Colleen Woodell, Long Island, Chris Freire, Glens Falls, and Andrea Woodell, West Linn, OR; five step-grandchildren; and two nieces and one nephew. Glenn was predeceased by his sister Erma Atwell, December 1999.

Calling hours will be held at Cummings Funeral Service, Inc., Watertown on Thursday, April 21, from 4 - 6 PM. The funeral mass will be celebrated at 10 AM at Holy Family Church on Friday, April 22 followed by burial in Brookside Cemetery. Face masks for the unvaccinated are requested by the family for the calling hours and funeral.

Donations in Glenn's name may be made to the Kelsey J. Poska Trust (his step granddaughter), 2293 SW Borland Rd., West Linn, OR 97068. Online condolences to his family may be posted at www.cummingsfuneral.com.

12
#14 Susan Hawkins 2022-04-20 09:31
Steve, I'm so sorry about the loss of your Dad. He sounds like an amazing fellow! So many will miss him; all these condolence messages show what an influential guy he was.
I'll be keeping you and your family in my thoughts in this time of sorrow.
---sue h