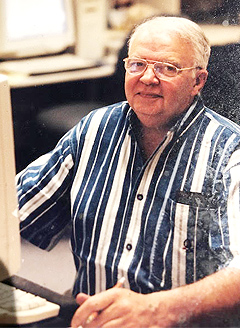 John A. O'Donnell, 83, of Watertown passed away Sunday, April 24, 2022, surrounded by his family at Samaritan Summit Village where he had resided since the fall of 2018.

John was born in Binghamton March 28, 1939, son of the late Joseph F. and Helen L. Griffin O'Donnell. He was a 1957 graduate of Binghamton Central School and graduated from Leland Powers School of Radio, TV, and Theater, Boston, MA in 1960. He married Maureen Regan on October 16, 1965 in Massena.

John was fortunate to have covered many national championships and all local college and high school men's and women's sports. He received the NYS Publisher's Award for distinguished local reporting for the 1980 Olympics, including the Miracle on Ice. Every autumn he was known for his OD on football in the Watertown Daily Times, where enthusiast fans tried to out pick him.

He was a communicant of Holy Family Church. While in Ogdensburg, John was a member of its Lions and Elks Clubs and the Knights of Columbus, supported its Boys Club, and helped get Pop Warner started in Ogdensburg. He was a member of the Watertown Elks Club and Knights of Columbus, volunteered for Hospice of Jefferson County, and was a patient advocate at the House of the Good Samaritan. John enjoyed music, especially Big Bands and reading, with his favorite as History. He was a member of both the Watertown Red and Black and the Jefferson Communitity College Hall of Fames. John will be greatly missed by his coffee buddies at Pickles, Lloyd's, Tiny's, Stratton's, and Russell's Cafe.

The family would like to thank his doctor, Dr. Collins Kellogg, and his caretakers at Samaritan Summit Village, April, Abby, Steve, Shal, Heather, Jerry, Mandy, Cindy, Isabella, Nishelle, Susie, Shauna, Nichola, and Tim Cole for their care and devotion they showed to John.

Calling hours will be held at Cummings Funeral Service, Inc., Watertown on Friday, April 29, from 4 - 6 PM. The funeral mass will be celebrated on Saturday, April 30, at 1 PM at Holy Family Church followed by burial in Glenwood Cemetery. Online condolences to his family may be posted at www.cummingsfuneral.com.

12
#19 Darlene Sheitz 2022-05-01 10:01
My sympathies to all of John's family. He was a very special man. I had the pleasure of working with him for many years at the Watertown Daily Times. He could always make me smile. Condolences, Darlene Dufour Sheitz
Report to administrator
#18 Sheila Donoghue 2022-04-30 17:30
Our thoughts and prayers are with the entire O’Donnell family.
Sincerely,
The Donoghue’s

Report to administrator
#17 Timothy Curtis 2022-04-30 16:18
To the O’Donnell— I am saddened to hear of Mr. O’Donnell’s passing. He has a kind spirit and the world lost a great family man. Please know you are all in my families prayers at this time of sorrow.
Report to administrator
#16 Susan Coseo 2022-04-29 09:19
To Maureen, our condolences are with you at this difficult time. Tom & Sue (Swift) Coseo
Report to administrator
#15 Deb/Rick Felice 2022-04-29 08:57
Condolences to the family of Mr ODonnell
Report to administrator
#14 Danielle Bartlett 2022-04-28 14:25
Maureen and family, am so sorry to hear about John's passing. Please know that my thoughts and prayers are with you all during this difficult time. I got to know him through the boxing program at Summitt Village. I know he enjoyed the program and it was a great way to get folks out of their rooms. I enjoyed seeing you too Maureen. again, you have my sincere condolences.
Report to administrator
#13 Cindy & Bub Lashomb 2022-04-27 21:35
Maureen & family,
So many precious memories! Its impossible to envision John without a smile. Despite our separation by miles, John always kept in touch by phone for as long as was possible. He had a unique way of always starting the conversation with, "How's everything with the Lashombs"? He was a great friend to all who were gifted with his friendship. Carry on the O'Donnell name with pride, John, Joe, Bob, & Tim!
Report to administrator
#12 michael schell 2022-04-27 18:34
John and Maureen were among the first to make us feel welcome when we first relocated to Watertown almost 50 years ago. A few years later OD took me on the wheel barrel ride depicted in the photo. I think OD was as happy to pay off the bet (Lawyers softball team beat OD's Times team) as I was to win the bet. He meant so much to the sporting community and to the community at large. Our sympathies are with his family. Mike and Jacki Schell
Report to administrator
#11 Bud Cole 2022-04-27 15:16
My sincere sympathy and sadness goes out to all of John's family. John and I became very good friends over the years as he wrote and interviewed me on my accomplishmetns in bowling. I am very fortunate that I got to meet and be a friend of John's.
I was especially glad that my middle son, Tim, was a help to all the family during John's illness.
R.I.P. OD Hope to meet you again ont he other side.
Report to administrator
#10 John & Melanie Day 2022-04-27 13:42
Our hearts go out to the O’Donnell family. O’D started out as my boss but quickly became my mentor & dear friend. He taught me so much about sports writing but more importantly how to treat people. In nearly thirty years together, I always saw John greet everyone with a smile and a story. John’s love of life and family endeared him to all who knew him. He will be greatly missed.
Report to administrator
12
Refresh comments list