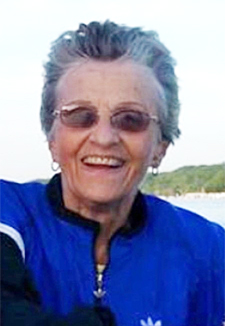 Born in Watertown on July 18, 1938, the daughter of Dayton and Ella Thompson Blunt and the granddaughter of Charles Thomspon (mayor of Clayton from 1934 - 1936) and Emma Fuller Thompson, Cynie spent every summer of her youth in the tourist home of her grandmother on James St., Clayton. She lived and schooled in Mount Vernon where her father was a school principal, and she graduated from A. B. Davis High School in 1955. She had many friends in Clayton and in her teen years always had a summer job, most notably as a clerk in the Clayton Department Store and later as a server for the Natali Bros. at the C-Way Inn Restaurant.

Cynie graduated from Bucknell University in 1959 with a major in music education. She had an outstanding soprano voice and was often heard singing in the choir of the Clayton Baptist Church. Upon graduation she taught for three years in the Elwood School district on Long Island. On February 24, 1962 she married David A. Kendall, whom she had known during her many years in Clayton, at Greenlawn Presbyterian Church on Long Island with his brother officiating. They moved to Rochester following the wedding. She continued her vocal music teaching career in several districts, only stopping and changing due to her husband's graduate studies in Oregon and Pennsylvania and the arrival of their two daughters. The last twenty years of her teaching were spent in the Rochester City Schools. Even though suburban teaching was considered more enjoyable and more lucrative, Cynie got the most satisfaction and pleasure from her years of teaching in the inner city. She had experience teaching all grade levels and ages, but spent her later years in the elementary schools where her specialty was in producing yearly stage shows. She was a master teacher and disciplinarian and always fair - and the students loved her!

Cynie retired from her educational career in 1993, but began looking for a new challenge. She looked at several network marketing companies, and finally settled on Ecoquest International, an air/water/nutrition firm offering quality products while working from home. Within a few years she rose to number one in the world in sales volume, thus earning for her and her husband trips to Switzerland, Cancun, England, and the Galapagos Islands of Ecuador, as well as several cruises.

She loved sports, both as a participant and observer. She enjoyed gardening, gym workouts, walking, golf, boating and swimming in the St. Lawrence River, and especially family outings. As a young adult she participated in many local reruns of Broadway shows, having the lead female role in such plays as Guys and Dolls, South Pacific, Of Thee I Sing, and Girl Crazy.

A graveside service for both Cynie and David will take place in Clayton Cemetery at a time and date to be announced in August or September. Arrangements are entrusted with Cummings Funeral Service, Inc., Clayton and online condolences to her family may be posted at www.cummingsfuneral.com. In lieu of flowers, donations in Cynie's name may be made to Wounded Warriors Project.

#1 McKenzie Benedict 2022-06-17 16:59
My heart goes out to all family and friends affected by the loss of this wonderful, kind soul. I am so thankful for your short presence in my life and the opportunity to take care of you.
Report to administrator
Refresh comments list