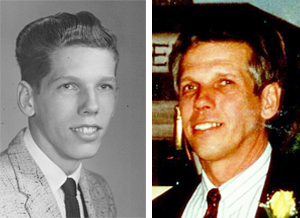 Richard C. Baker, 77, formerly of LaFargeville passed away Tuesday, June 21, 2022, while being a resident at Samaritan Keep Home in Watertown since August 2019.

Calling hours will be Wednesday, June 29, at Cummings Funeral Service, Inc., Watertown from 5:00 - 7:00pm. Funeral services will be Thursday, June 30, at 11:00am at the funeral home with the burial following in Grove Cemetery in LaFargeville. A celebration of his life will follow at the Brownville American Legion.

Rick was born February 19, 1945, in Buffalo, NY, son of Charles and Helena Baker, and graduated Watertown High School in 1963. His first marriage ended in a divorce. On December 23, 1995, he married Sally J. Riches. She was the love of Rick's life, and he took care of her until she peacefully passed away with him by her side on May 14, 2013.

He proudly served in the United States Air Force in 1964 -1968 as well as the Vietnam War. Rick was proud and loyal about serving the community. He made himself available anytime, day or night by serving as Pamelia Town Judge for 28 years. As Justice of The Peace, he was humble to have married hundreds of people in the North Country by traveling to them or by opening his house for a place for them to come and say, "I Do".

Rick was a longtime dairy farmer and owned and operated Rick's Auto Electric out of his home on Route 37. He enjoyed working with his brother Al for Tri County Appraisals. He also worked for Kodak, Glenwood Cemetery, was a flagman at Evans Mills Speedway, and a wingman snowplowing for the town of Pamelia. Was an active member of the Pamelia Volunteer Fire Department back in his younger days.

Later, Rick and Sally opened a business together called Great Gifts and More also out of their home and started selling their love of woodwork that they made. Together they raised and registered Belgian Draft Horses; was a member of the North Country Draft Horse Club; a lifetime member of the Agricultural Musem in Stone Mills and was active in the Stone Mills Craft Fair.

Rick enjoyed building stock cars for local race car drivers as well as being on the "pit crew" helping out. He had a love for NASCAR Racing and was a Dale Earnhart & Dale Jr. fan and loved going to the Daytona 500 races with his brother Al. He enjoyed his workshop and making wood crafts, bowling, playing pitch, reading, watching movies, listening to music, puttering on his Steel Guitar that he wasn't any good at, but it never stopped him from dreaming, camping, Saturday night bonfires at his house and entertaining guests, attending horse shows and pulls, visiting with Amish friends, was a loyal customer to Longways Diner to enjoy some good camaraderie with friends. He also had a love for Reba McEntire to whom he would say was his "girlfriend".

Donations in Rick's name can be made to the Alzheimer's Association, CNY Chapter at P. O. Box 12226, Syracuse, NY 13218 or the Association for the Blind & Visually Impaired of Jefferson County at 321 Prospect St. Watertown, NY 13601.

The family would like to thank Callie the OptumCare nurse as well as Meghan, Karen, Shannon, Shirley and all the other nurses and aides on the 8th floor at Samaritan Keep Home for their generous support and care in taking such great care of Rick over the past few years. It has truly been a blessing to have had each of you play such an important role in his life no matter what that role may have been. Thank you for ALL you do!

Online condolences to his family may be posted at www.cummingsfuneral.com.