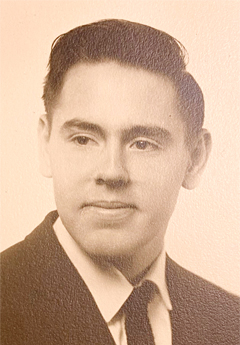 Dick was born in Chestertown, August 23, 1944, son of W, Harry and Inez M. Cooper Bartlett. He was a graduate of Chestertown High School and Morrisville ATC, with a degree in Horticulture. He received his bachelor's degree in Wildlife Management from Cornell University in 1968. He entered an internship with Cornell's Colombia Peace Corps program.

Dick taught heavy equipment and forest management for BOCES, in Johnstown, New York and worked for Iroquois National Wildlife Refuge for the Fish and Wildlife Service for several years. The couple served in the Peace Corps in Columbia, South America. Dick and Maureen upon returning to the United States moved to Vermont where he worked for Old Fox Chemicals in Branden, VT. He developed an interest in dairy farming and purchased his in-laws dairy farm in LaFargeville (Timberdoodle Farm). He retired at the age of 52 from dairy farming then continued to work DeLuke's Garden Center, Clayton.

Dick was a member of the Jefferson County Farm Bureau, NNY Agricultural Historical Society, where he held several positions, and Jefferson County Water Resource Board. He was awarded Conservation Farmer of the Year. He was an avid hunter, loved to work in the woods, and came from a family of loggers.

He was president for 17 years of 1000 Islands Bluegrass Preservation Society. He was instrumental in bringing the Bluegrass Festival to Stone Mills Museum and the Bluegrass Winter-Get-Away to Bonnie Castle, Alexandria Bay. He was proud to bring many musicians together from the United States and Canada for the festivals. He played guitar, fiddle, mandolin and stand up bass. Dick formed the bluegrass band ‘Rivergrass’, members included Maureen and several Canadian musicians. He enjoyed mentoring young musicians and was an inspiration to many.

Dick is survived by his wife, Maureen, his daughter Angela V. Cipullo, Clayton, and son Jesse Stuart Bartlett, LaFargeville. He also has two granddaughters, Mikayla and Adelaide and several nieces and nephews. His two brothers, Robert E. and William H. Bartlett, predeceased him along with his son-in-law John T. Cipullo, July 26, 2022.

A celebration of his life will be held on Sunday, September 11, at DeLuke's Garden Center, New York State Route 12 beginning at noon. Arrangements are entrusted with Cummings Funeral Service, Inc., Clayton and online condolences to Dick's family may be posted at www.cummingsfuneral.com. In lieu of flowers, donations in his name may be made to NNY Agricultural Historical Society, attn. Church Restoration Fund, PO Box 108, LaFargeville, NY 13656.

#4 Carol Fazio 2022-07-28 11:10
Ed and I are so sorry for your loss of Dick, Maureen. And for Angela's losses of both her husband and father. We just wanted you both to know that our hearts and prayers are ever with you. We'll be up north to join in the celebration of life with you. Much love from each of us, Ed and Carol
Report to administrator
#3 The Senkowiczs 2022-07-27 20:17
We were so sorry to hear of Dick's passing. We remember the good times we all had together, including when he introduced us to the giant garage sales in Chestertown. You have our deepest sympathies.
Report to administrator
#2 Laurie Marr 2022-07-25 12:30
Angie, so sorry to hear about your Dad. I (and the rest of my family) spent a lot of time with him at DeLuke's, learning a lot. He always went out of his way to be kind and helpful - to everyone. He will be missed in many regional circles and he will be remembered for his many contributions to our lives.
Report to administrator
#1 Karen Derouin 2022-07-25 12:01
Maureen, I am so sorry for your loss. My thoughts and prayers are with you.
Report to administrator
Refresh comments list