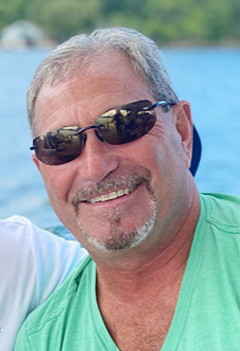 John was born in Watertown, September 29, 1961, son of Charles A. and H. Elizabeth "Betty" Marshall Cipullo. He was a 1980 graduate of Thousand Islands High School and attended both Erie Community College and SUNY Cortland.

Johnny was a wonderful husband and father. On December 24, 2000, he married Angela V. Bartlett in Clayton, and the marriage was later blessed at St. Mary's Church with Fr. Arthur J. LaBaff officiating. In 2002, the happy couple welcomed their beautiful daughter Mikayla.

He was a communicant of St. Mary's Church and a member of Colon Couch Sons of the American Legion Post 821. Johnny was a member of the Clayton Youth Commission, where he coached youth softball, and also a member of the T. I. Youth Hockey Association, USA Hockey Coaching Achievement Program and coached several youth hockey teams.

From an early age, it was clear Johnny was an exceptional athlete -- be it on the street corners playing hockey or on the sand lots or side yards playing baseball or football. Be it at the Lions Field or the elementary school gym for youth commission sports, he would be there with his friends. The first nickname he earned was "Muscles", as a long haired youth from the other side of town. His enthusiasm, fun spirit and enjoyment of youth sports was contagious in the small community. He played youth baseball, little league through pony league, and was a member of the pony league championship team coached by Jerry Wetterhahn. He played pop warner football and was a member of the 4-0 Green Machine two years running, coached by Earl Cole. He played minor hockey, peewee to high school club, and in 1979 led the Clayton Pirates to win the NY State Club Hockey championship in Buffalo. He was a standout high school baseball catcher, and then nicknamed "Munson". According to football Coach Jim Rhinebeck, Johnny was an exceptional high school football player. Johnny holds the Thousand Islands High School record for returning a pass interception, 62 yards, to score a touchdown in 1978.

After graduation, John attended Erie Community College (ECC) with fellow Pirates, Chris Rhinebeck and Mark Burgess. In 1983 the ECC KATS played for the National Championship in the Buffalo Auditorium. That year he was named the ECC male athlete of the year and was selected as a first team NJCAA All American forward. In the following years, he continued to play adult hockey. In 1996, he was an organizer of the O'Briens, River Rats, Labatts River Hockey League Championship team. For many years he was a star for the adult Watertown Hackers hockey team. He enjoyed slow and fast pitch softball and bowling.

He was an avid sports enthusiast all of his life and enjoyed watching his favorite professional teams. He was a die-hard Yankees, Dolphins and Bruins fan. Friends and family would call on him to recall statistics on sports teams, history, politics, musical artists or Rusty might say, "Johnny, tell that story when we ..." He had a beautiful voice, an appreciation for music and could be heard singing his favorite songs. He and his wife and daughter enjoyed vacationing together each year. Johnny's greatest joy in his life was coaching his daughter and watching her play hockey.

Johnny started his bartending career at McCormicks Restaurant. His next opportunity was working for his brother Joe, at the helm, as bar manager of O'Briens Restaurant and bar. He then began a new career with George Kittle at Thousand Islands Property Services as a property manager and currently was employed as the Sea-Doo parts and service manager for the Forger family at Clayton Marina. He was very successful in his employment history.

Along with his wife, Angela, he is survived by his daughter, Mikayla M. Cipullo, Clayton; three brothers, Joseph C. and wife Charlotte, Matthew G. and Louise, and Anthony J. Cipullo, and sister Sheila A. Glenn, all of Clayton; mother-in-law Maureen L. Bartlett and several nieces, nephews, and cousins. John was predeceased by his parents; infant brother Michael; sister, Mary C. Lindsay; father-in-law, Richard A. Bartlett; and Leonard P. O'Brien.

Calling hours will be held at Cummings Funeral Service, Inc., Clayton, on Sunday, July 31, from 1 - 5 PM. The funeral mass will be celebrated on Monday, August 1, at 1PM at St. Mary's Church with Fr. Arthur J. LaBaff presiding. Online condolences to John's family may be posted at www.cummingsfuneral.com. In lieu of flowers, donations in his name may be made to Thousand Islands Youth Hockey, PO Box 278 or Clayton Food Pantry, 521 James St., both in Clayton, NY 13624.

1234
#35 Paige Garnsey-Wiley 2022-08-02 13:49
I will miss always being greeted with a big hug and an even bigger smile. He made the world a better place. I will forever cherish the years of working with Johnny and Ang at the Clipper- SO many laughs. Johnny was certainly a loved man. Love you so much Ang, KK and the Cipullo family.