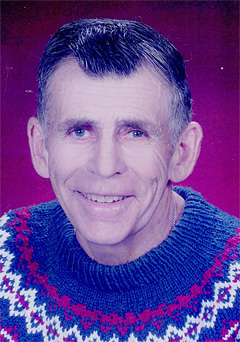 Joseph was born in Watertown October 10, 1934, son of W. Montegomery and Irene M. Lynch Coughlin. He was a graduate of Mt. Assumption Institute, Plattsburgh and attended Clarkson College.

Joseph was an engineer for NYS Dept. of Transportation for 37 1/2 years, retiring March 29, 1991. He was a communicant of Our Lady of the Sacred Heart Church and was very active in various church related activities. Joe enjoyed taking his family camping all over the United States and Canada. He loved gardening and landscaping, wood working, swimming, ice skating, snowmobiling, bike and motorcycle riding, and was an avid snowshoer. He was an Eagle Scout and had received trophies for ski jumping and pistol shooting.

At age 46 he took up mountain climbing and became a Black River Chapter member of the Adirondack Mountain Club, becoming a "46er" that same year, the only one to accomplish this. In 1984 he bacame a "111er" of the Appalachian Mountain Club and continued to climb peaks all over the United States into his early 80's. He especially enjoyed his annual New Year's Day climb of a peak.

He is survived by his five children, Mary Rose Sheldon and husband Eric, Adams, Patrick M. and companion Dawn Bartlett, Watertown, Joseph W. Jr. and wife Jeanette, Sand Springs, OK, Irene M. Stapleton and husband Kevin, Greensboro, NC, and Shawn C., Greensboro, NC; 10 grandchildren and 20 great-grandchildren; and several nieces, nephews, and cousins. Along with his parents, Joseph was predeceased by 2 sons, Michael in 1961 and Stephen F. in 2019, and his brother and wife, James M. and Elizabeth Coughlin

#7 Nancy Coughlin 2022-08-06 17:56
So sorry to here of Joe’s passing. May his memories sustain you. I will certainly never forget him.
Nancy
Report to administrator
#6 Marty Morrison 2022-08-05 10:05
Pat, sorry to hear of your father passing. Remember any good times and share stories about him. Laughter helps ease the grief. Condolences to you, your children and your entire family. Marty and Lynne Morrison
Report to administrator
#5 Mary Anne Vaughn 2022-08-03 08:12
Patrick and Family, our heartfelt sympathy goes out to you all. What a legacy your Dad left! Life was good!
God Bless.

My deepest sympathies. God Bless. Paul N Fiegl
Report to administrator
#1 Tim Kathy Plante 2022-08-02 18:38
We are so sorry for your loss, our thoughts are with you.