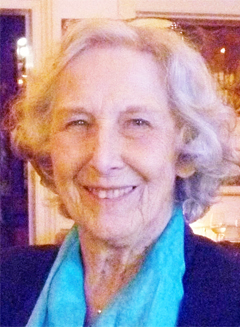 Mimi had lived in Black River during high school (1937-40) and was employed as private secretary to the USO director in Black River, and then at Pine Camp during World War II. While she and her husband, Red Langdon spent much of their career years and early retirement in the Rochester area and in Virginia, they were summer residents of Clayton for many years and renovated their summer home into the year around residence in which they shared until Red's death, and where Mimi resided for over twenty years. Ultimately, Mimi moved closer to her son, daughter-in-law and family, where she was proud to call herself a Vermonter during the last two decades of her life.

Mimi was predeceased by her father, Ernie Welt (who died when Mimi was a small child); by her mother Gladys Maier Welt Lewis and her stepfather, Paul Dewey Lewis, of Clayton; by her husband, John (Red) Langdon of Clayton; and by her sister, Jane Welt, also a centenarian. She is survived by her son Richard Langdon (Elaine) of Middlesex, Vermont; her daughter Jane Looby (Michael) of Pittsford, NY; her grandchildren Liam Looby (Marin) of Madison, WI; Maren Langdon Spillane (Dominic) of Northfield, Vermont; Elizabeth Looby (Turki Alghamdi) of San Jose, CA; by her three great-grandchildren, Gracelyn and Oliver Spillane and John Looby; and by nieces and a nephew.

As Mimi noted herself in a biographical sketch written many years ago, two major themes were intertwined throughout her life: a devotion to art (several media) and music, and the desire for a close family. Coming of age as the Great Depression ended and World War II was beginning, she noted "... I wanted to go to art school after high school graduation [but] I knew it was out of the question as there just wasn't the money ... I never regretted how it turned out as beneath it all, my main ambition was to marry and have children..." She also wrote, of the Black River years "...Benny Goodman and Glen Miller were my gods and the Big Apple and Lindy were our dances...."

The desire to develop her art never passed and her homes were each alive with watercolors she had painted; and in hand-stenciled walls and furniture. On occasion, she brought stones and designs to a jeweler to make rings to her specifications and later, gave them as very personal gifts to family members, completing college or graduate school, "...while I'm still here to enjoy the giving and actually see them being worn." To one granddaughter she wrote, with the gift "...I never doubted that you had that degree in your pocket ... You have always been very special to me since the days when you had a knack for coming down the curved slide in the playground at Clayton backwards! I love you and so proud to tell my friends here about you."

During her years in Clayton, she counted among her friends the Thousand Islands watercolorists Hans Junga and Gladys White. She was regularly active in the classes and activities of the Thousand Islands Craft School (now the T.I. Arts Center). Once she had relocated to Vermont, she reveled in the Shelburne Museum and the galleries of Shelburne. Her granddaughter, Maren and Maren's husband Dominic are active in Vermont theater, and Mimi was delighted to be close to that work to the very end of her life. She also engaged regularly from a distance with her grandson Liam, in the Midwest, discussing their mutual love of big band and swing music. Liam said, "She taught me who Gene Krupa was." While Maren's focus was theater arts, close to her own arts orientation, Mimi's children and two of her grandchildren followed various science disciplines and Mimi made the effort to embrace those interests. To very near the end of her life, Mimi remained close to granddaughter Elizabeth in California, discussing climate and environmental matters with her (and science aside, encouraging her baking hobby).

Mimi's short memoir talks of meeting Red Langdon in Black River High School, in 1937, where she noted humorously "... I had set my cap, as they say, for Red and pursued him shamelessly." She succeeded, and they did marry at the Episcopal Church in Watertown, but not until late 1944 after Mimi's service at Pine Camp, and Red's US Army Air Corps service in the South Pacific; and raised a son and a daughter in Irondequoit, near Rochester. The cottage on Steele's Point, Clayton, was a focal point for the children and extended family for years and remained so for the next generation of the family, to the day that Mimi made the decision to go to Vermont. While there, the first two of her great-grandchildren were born and became the new focus of her affection. The children loved to play games with her, talk her hear off and read books with her, reminding their mother of her own childhood with Mimi. Oliver, in particular, loved to curl in her lap. While still quite young, Gracelyn and Oliver gave her back the spark of youth even, and perhaps especially, during the COVID pandemic when they visited her through the glass of the senior residence in Montpelier. Alas, she never met John, her third great-grandchild, who was born the month prior to her passing.

Mimi Langdon's remains will be interred with those of her husband, her mother and her stepfather in the family plot at Grove Cemetery, La Fargeville. A gravesite memorial will occur on August 17, 2022 at 1:00 PM. Arrangements are being made through Cummings Funeral Service, Inc., Clayton, New York. Online condolences to her family may be posted at www.cummingsfuneral.com.

Bless you all - Bill Grill