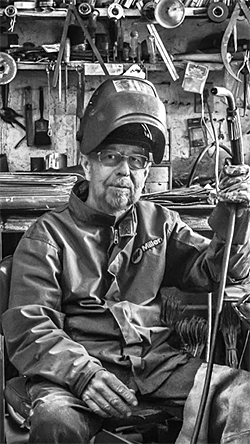 He was well known for being an artist, sculptor, and welder, but he was far more than that. He owned and operated Omar Welding, LLC and Granite Marine. He was a supporter of Amnesty International, SPCA of Jefferson County, local art galleries, food pantries, and National Geographic. He designed the North Country Artist website.

More than anything, Will was a compassionate lover of life, a perfectionist who saw imperfection and sought to make it better. He was a poet, a songwriter, a craftsman. His works, such as War’s Bedroom Scene, Poached Artillerie, The Drowning, Family, Rwanda, Leonardo’s Dream Machine, Thomas-Open Air Therapy, Looking for America, New Arrivals, Hanged Man, Mother’s Children, Muslim Victim With Exit Wound, The Captive, The Victim, Mushroom Cloud, Moonwalkers, and, of course, his most widely known My Three Crows along Route 81, stand as testaments to his tortured visions of humankind’s "crap".

Will traveled the world and absorbed life from all sides. From The Summer of Love spent in the Haight and Big Sur, to Mexico, Italy, and beyond, Will experienced the compassion of people, while paradoxically cringing at the atrocities of inhumanity. He carved his way through life meeting fellow artists and heroes - dinner with John and Yoko at the Everson in 1971 after helping to set up Yoko’s first art show, staying at Timothy Leary’s house in Berkeley, hanging out with Barry Freed/Abbie Hoffman, and more that we don’t know. He helped young people in need by giving them jobs and showing love of life, and the River, by example. Follow all at your own peril. His incredibly wide circle of influence will be unbroken.

A celebration of Will’s life and times will be held on Grindstone Island on September 3, Picton Channel Hooker’s Party 1981 redux.

Arrangements are entrusted with Cummings Funeral Service, Inc., Clayton, and online condolences to Will's family may be posted at www.cummingsfuneral.com. Will would like you to skip flowers and send any contributions in his memory to your local food bank or SPCA.

#5 Bob Hewitt 2022-08-26 12:24
Will was one of a kind alright! He'll be missed.
Report to administrator
#4 Mary Whiting 2022-08-26 12:04
Goodbye old friend. Will, over the past few years, would greet me in saying, "Hello, old friend." I loved that greeting as 45 years of knowing someone, indeed makes them an old friend (as in longtime). He taught me how to weld, and together we welded a sculpture similar to "Wonderment" which sits just outside his studio - barn. He is one of the most, creative, ingenious people I have known. Now, he is at peace and rest...missed by many who loved him.
Report to administrator
#3 Steven Strouse 2022-08-13 20:24
First met Will in the early 80's in Jupiter Fla been a long time since I have seen him, I have admired his work very talented, interesting and generous man, Rest in Peace Old Friend
Report to administrator
#2 Sue Campbell 2022-08-12 20:00
Karen and Will were as close as family to me. My yearly visits on Grindstone with them hold a cherished place in my heart. My very deepest sympathy to all the family on both sides. Will’s legacy in the north country has made it it a better place for all.
With Love,
Sue