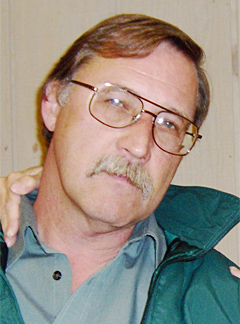 Bruce was born in Watertown June 15, 1954, son of Charles E. and Betty Anderson McDermott. He was a 1972 graduate of Watertown High School, where he ran track, and played baseball, hockey, and lacrosse. After graduation he entered the US Air Force. While serving his country, Bruce continued to play hockey and for a time was stationed in Belgium. He was honorably discharged in 1976. A marriage to Rose Barney ended in divorce.

He enjoyed hunting and gardening and was an animal lover - it didn't matter if they had fur or feathers. Bruce had played in bands around the north country, including The Third Floor Band and Moonshine.

As per Bruce's wishes there are no services. Arrangements are entrusted with Cummings Funeral Service, Inc., Clayton and online condolences to his family may be posted at www.cummingsfuneral.com. In lieu of flowers, donations in his name may be made to SPCA of Jefferson County, 25056 Water St., Watertown, NY 13601.

#7 Tim Baty 2022-09-22 20:07
Rose, Jarrod and Marisa, I offer my condolences to you in this time of your loss. Bruce was highly skilled and knowledgeable about all of the New York Air Brake's product line and never hesitated to help coworkers, field service representatives and customers to solve even the most vexing equipment operational and test problems. His efforts helped countless others to perform better. May Gid bless you with peace and comfort.
Report to administrator
#6 Paulette Collins 2022-09-22 01:13
Am saddened at the loss of a dear friend. Grew up with Bruce as he was the cousin to my best friend so he was around her home a lot. Lost track of each other as our lives took different directions. We reconnected this past year when he contacted me through fb. We had many conservstions recently so it was very hard to discover he had passed. He was a great guy. My heartfelt condolences to his family. He will truly be missed.
Report to administrator
#5 Kent Boynton 2022-09-21 10:58
In our younger years, we only lived blocks away.
The last time I spoke with him was at Pat's calling
hours. 68 is way too young for anyone of Bruce's
caliber to leave us. R.I.P. My Friend. You will be
missed by ALL who crossed your path in Life......

Report to administrator
#4 gary grovesteen 2022-09-20 16:57
Bruce was a great friend. I recently got back in touch with him. Glad I did. We graduated together from WHS in '72. He was one of the most likable guys you could ever meet.
Report to administrator
#3 Doreen Doherty/Berry 2022-09-20 08:54
I grew up with the MCDermott family and enjoyed hanging out at their house because it was always buzzing with activities. My fondest two memories of Bruce are when we painted my swing set with oil base paint and backed the car out of the driveway by taking it out of gear. Never a dull moment when Bruce stopped by. Sorry for you lost.
Report to administrator
#2 Gary Douglas 2022-09-19 22:34
I met and befriended Bruce early in 1972 while he was working part-time at Jet Gas on Coffeen Street.We both graduated from high school that year (different schools) and chummed around that summer.He was even an usher at my wedding in September 72.We both went in the USAF that year and we lost track of each other. I did run into him at basic training at Lackland AFB for just a few moments, but that is the last I remember ever seeing him. Yes, 50 years have gone by, but I still have great memories of a fun guy with a heck of a sense of humor. Godspeed Bruce.
(Someday I'll tell someone stories about the free gas raffle at Jet Gas!) :-)
Report to administrator
#1 James Ray 2022-09-19 13:00
I am greatly saddened by the loss of another classmate. I wasn't very close to Bruce but remember him as a good guy. Fair winds and following seas my friend.
Report to administrator
Refresh comments list