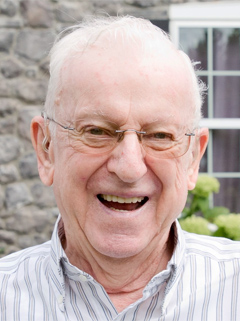 His first job was teaching mathematics and science in New Jersey schools from 1949 to 1952. From there he went to the Farmingdale (Long Island) school district, where he was the director of audio-visual services, as well as an Assistant Superintendent. In Farmingdale he met the love of his life, Mary Elizabeth McCollum, who was a remedial reading teacher. They married in 1959.

George and Mary moved to Clayton in 1964 when he accepted the position of district principal for the Clayton Central School. When the new Thousand Islands Central School District was created by merger. Dr. Forbes served as its superintendent until his retirement in 1982. He was enthusiastically involved with the activities and achievements of all his students, and he cared about the well-being of each one.

"Retirement" for George Forbes meant another 12 years as a professional educator. He served as interim superintendent for the Alfred-Almond and the Jasper-Troupsburg school districts. He was a lecturer for St. Lawrence University in School Finance and Law, and an adjunct instructor in Education Law for SUNY Potsdam. As a private consultant, he researched and developed plans for Jefferson Community College, as well as for many public-school districts: Belleville and Henderson, Beaver River, Copenhagen, Indian River, Sackets Harbor, Clinton, and Lake Placid. In addition, he was plan manager and treasurer for the Jefferson-Lewis Schools Employees' Healthcare Plan, the Black River Valley Schools Workers' Compensation Plan, and the Indian River Schools Dental Care Plan. From 1983 - 1992 he was executive secretary of the Jefferson-Lewis Schools Boards Association. Dr. Forbes was vice president of the North Central Zone of the NY State Retired Teachers Association for many years.

Dr. Forbes was an active participant and leader in community life. He served on many Boards of Directors: Jefferson County United Way; E. J. Noble (now River) Hospital; the North Country Reference and Research Resources Council; the Thousand Islands Girl Scout Council; the Hawn Memorial Library; and the Thousand Islands Foundation. He served on the Education Committee of the Northern NY Community Foundation. From 1984 - 1991 he and his wife were co-executive secretaries for the Jefferson Community College Foundation. He served on the Clayton Village Planning Board. In 1982 he was named Clayton Citizen of the Year.

Dr. Forbes was a long-time member of the Clayton Lions Club; he was their treasurer for many years and served on the Board of Directors. In 2001 he was awarded the Robert J. Uplinger Distinguished Service Award for his service to the Club.

He was a member of the Clayton United Methodist Church, serving on the Administrative Board and on the Board of Trustees. He was Lay Leader of the congregation for many years, and in 2000 he was named the Lay Person of the Year by the church.

George and Mary's most important and far-reaching project together was the founding of the Clayton Chapter (now Thousand Islands Chapter) of the American Field Service (now AFS) student exchange program. They variously served as president, treasurer, and Northern NY Area Representatives. In the 1968-69 school year, George and Mary hosted Ilhami Ozturk, an AFS student from Turkey. The experience grew into a loving multigenerational family relationship, a family bond that continues today.

George and Mary were enthusiastic travelers. They visited all 50 states and many foreign countries together. They kept in touch with former exchange students around the world, visiting their homes and even attending their weddings. George was a welcomed guest at far-flung chapters of the Lions Club International, and he traded club pins with dozens of them. He took photos on all his travels and shared his experiences by giving slide shows at churches, club meetings, and senior centers. After Mary's death in 2002 George continued to travel on his own, with a lifetime total of 64 countries.

George was a citizen of the world, a friend to all he met, a trusted advisor and counselor, with an abiding love for his wife and his home. He was deeply blessed throughout the years by the Clayton community he so loved.

The funeral service for George Forbes will be held at the Clayton United Methodist Church on Saturday, October 22, at 11:00 am. Contributions may be made to the Forbes Thousand Islands School Scholarship Fund, c/o NNY Community Foundation, Inc., 131 Washington St., Watertown, NY 13601.

Arrangements are entrusted to Cummings Funeral Service, Inc., Clayton, and online condolences to his family may be posted at www.cummingsfuneral.com.

#7 Barry Kukowski 2022-10-30 20:25
I first met George Forbes when I joined the Clayton Lions Club. I knew from my first introduction to George that he was a very special person. This led to a long standing friendship. I feel very blessed to have had George as a friend and neighbor. I will surley miss that gentleman who was always there for advice. Heaven has a special angel.
Report to administrator
#6 James Rhinebeck 2022-10-13 09:07
Dr Forbes was a true leader .He and Mary never missed any athletic event home or on the road or any concert or school plays or dances. He wanted the best for his school his students and his teachers and coaches. He was an example of what a school administrator and education leader should be. He was also my friend.JRhinebe ck
Report to administrator
#5 Cathy Saunders 2022-10-10 16:23
Dr. Forbes will be missed by many. He was a wonderful man who knew every name of every student and never forgot you even after graduation. He was a fair, understanding, and gentle human being. My thoughts and prayers go out to his family and especially Ilhami Osturk who I graduated with in 1969.
Report to administrator
#4 Agnes Bitter 2022-10-10 16:15
I was an AFS Student from Germany in 1971/72 and Dr. Forbes was "my" principal, well respected at that time. For our 50 year Reunion I had the opportunity to visit him in his house and had a very vivid exchange of old time memories. That makes me now even more happier. RIP Dr. Forbes.
Report to administrator
#3 Kathy Evans 2022-10-08 21:45
Dr Forbes was a well respected educator and a friendly loving man. I had the pleasure of getting to know Dr. Forbes and Mary Forbes when I was chosen to be Ilhami’s foster sister for my senior year with Ilhami. They were wonderful parents to Ilhami and were favorites of our class of 1969. They loved sharing in all of our reunions. Clayton has lost a vital person from their
community.
Report to administrator
#2 dale harvey 2022-10-08 15:22
Rip George you were a member of the clayton fire booster club for many years and a pillar of clayton community god is getting a great man
Report to administrator
#1 Thomas LaClair 2022-10-08 14:59
I was born in 1961, entered Clayton Elementary in 1966, and graduated at Thousand Islands High School with the Class of 1979. Dr. Forbes is listed on my High School Diploma. I not only respected Dr. Forbes, I thought he was nice all around. I enjoyed his demeanor and his way with students. I enjoyed the opportunities I had to see him in the community, at many of the Lion's Club Spaghetti dinners at the C-Way restaurant. RIP Principal Forbes. You lived a full life, and you uprightly touched the lives of so many.
Report to administrator
Refresh comments list