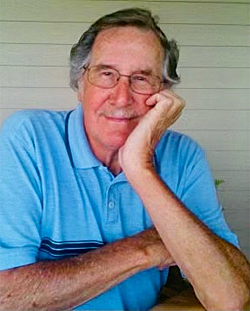 John Hill, Watertown NY passed away October 30th, 2022 at Jefferson County Hospice Residence, peacefully surrounded by his loved ones, at the age of 92. He was born November 17, 1929 in Bradford, Yorkshire, England, the son of Thomas Hill and Laura Goldsmith Hill.

John came of age, in very modest means during World War 2, he loved soccer and idolized his father Thomas (Tommy) Hill, who was a Full Back for Bradford City Soccer Club, and during his time with the team played in Premiership League. After graduating school, John served in the Royal Air Force and then apprenticed as a stained-glass artisan. He married Violet Nellie (Jean) Cameron on March 23, 1957, shortly thereafter emigrated to Toronto, Canada, until he was sponsored by Kex Studios to emigrate to the United States and moved with his wife to Syracuse NY where they had four children.

In the early 1960s he went to work for Syracuse Glass Co, John moving with his family to Watertown NY in 1972, as General Manager of Northern Glass Company which he later purchased from his employer. He never worked for anyone other than himself for the rest of his life. In testimony to his effort and tireless sacrifice, the business operates to this day owned by his daughter Linda and his son Ian. If there ever was an embodiment of the American Dream, he was it. John represented the very best of what courage, hard work, sacrifice, great enthusiasm and devotion can create in America. John and his wife Jean proudly became United States Citizens in 2002.

To know John, was to know his family. John proudly introduced his children, grandchildren and great-grand children to anyone around him. Being surrounded by his family was his greatest joy. Entering his home, John would systematically mute his TV (unless the Giants were playing) to hear about your day, telling what seemed to be a mundane day, hearing about it was the highlight of his. He was always cheering on his grandkids from the sidelines, in the audience at a school play or graduation, giving advice and being the listener we all needed.

Telling stories was one of John's many attributes. Stories about growing up in England, of the war, the birth of his children, immigrating to the US and so much more. The look in his eye, half laugh he would give and smile that was held on his face, captivated any audience that was lucky enough to be hearing it. If you were one of his grandchildren you've had the joy of hearing John's stories countless times, and never lost interest at Thursday night dinners, which you didn't miss for anything.

John was a doer of deeds, emigrating to two foreign countries with nothing except himself, wife, children and very little else and left behind so very much. When it came to betting on himself or something else, he always, fearlessly bet on himself. While he might not have won them all, in the end he won more than his share. His family will be forever grateful and indebted to him for having done so.

He was a father, grandfather, a brother, a son, a friend, an immigrant, veteran, avid golfer, lover of jokes and a deeply, deeply devoted husband. He was loved immensely by his family and will be greatly missed. John came, he saw, and if he didn't entirely conquer, he came closer than anyone we expect to meet in our lifetime. The world will be a lesser place without him as a part of it.

Beside his parents John was predeceased by his wife of 60 years Violet "Jean" Hill, his beloved sister Alyce, brother-in-law Lawrence Caine and brother Stephen Hill.

Calling hours will be Thursday November 3, 2022 from 4pm to 7pm at Cummings Funeral Service, Inc., Watertown. A funeral mass will be held at Our Lady of the Sacred Heart November 4, 2022 at 11 am. Burial will be immediately following at Calvary Cemetery.

Donations may be made to the Northern New York Builders Exchange Scholarship Fund, 22074 Fabco Road, The Sacred Heart Foundation, 320 W Lynde Street, or Hospice of Jefferson County, 1398 Gotham St. all in Watertown NY 13601. Online condolences to his family may be posted at www.cummingsfuneral.com.

The family would like to express their extreme gratitude and thank the staff of Ives Hill Retirement Community, his many caregivers and Hospice of Jefferson County for the compassionate care he received the last years of his life.

#7 Carl Franks 2022-11-04 10:29
Linda and family, Very sorry about your dad's passing. My family were good customers from your family business at Northern Glass, they did a lot of repair work on a few of our windows and doors. Sorry that I could not make it to the funeral due to a recent fall I had that left me bruised for awhile, but my prayers are with you during this sad time.
Report to administrator
#6 Carisa Wellenreuther 2022-11-02 14:53
In the three decades I have known the Hughes family, I’ve been lucky enough to meet Mr. Hill at so many family occasions. He was a true gentleman and always went out of his way to make family and friends feel welcome at any event. Keeping the entire Hill/Hughes/Pet rie clan in my thoughts and prayers.
Report to administrator
#5 Jack Finneran 2022-11-02 09:27
John was everything written here and more. My deepest sympathies to his family.
Report to administrator
#4 JAMES ZEHR 2022-11-01 11:35
PRAYERS SENT TO THE FAMILY AND FRIENDS. R.I.P. MR HILL.
Report to administrator
#3 Robert Fox 2022-11-01 11:02
I wish to extend my sincere condolences to John's entire family. He was a special person who always made me laugh. I'm sure you all will have memories to share for many years to come.
Report to administrator
#2 Dawn Grublauskas 2022-11-01 08:20
Mr. Hill was such a nice man! Was lucky enough to meet him when he moved to Ives Hill Community! I was fortunate to hear some of his stories. Deepest sympathy to the family at this difficult time. Ian and Debbie you are in my thoughts and prayers! Hugs
Report to administrator
#1 Kim & Dennis Jackson 2022-10-31 19:54
Our thoughts are with the family at this time. Mr. Hill meant a lot to our son. He will always have fond memories of this wonderful man.
Report to administrator
Refresh comments list