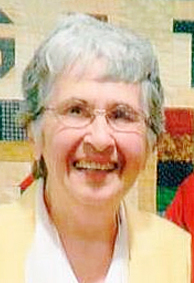 Barbara was born in Chazy June 19, 1937, daughter of Herman and Jane Bosley Neverett. She was an honor graduate from St. John's Academy, Plattsburgh in 1955. In 1959 she received her B.S. degree with a major in Nurse-Teacher Education from SUNY Teacher's College, Plattsburgh. She did graduate work at Bridgewater (MA) State College for Teachers, SUNY Potsdam, and SUNY Plattsburgh. Barbara received Permanent Certification as a public school teacher of Biology and General Science from NYS Education Dept. in 1979.

Barbara worked as a registered nurse at The House of the Good Samaritan, as an infirmary nurse at SUNY Oswego, and part time as an office nurse for several Oswego area physicians. In 1962 the couple moved to Watertown. In 1968 she went back to work and was a school nurse at several Watertown schools. Barbara began teaching 7th grade science at Case Junior High School in 1976 and retired from the Watertown City School District in 1992.

Funeral services will be held at the convenience of her family. Arrangements are entrusted with Cummings Funeral Service, Inc., Watertown and online condolences to Barbara's family may be posted at www.cummingsfuneral.com. In lieu of flowers donations in her name may be made to NNY Community Foundation, 131 Washington St., Watertown, NY 13601, designated for the Barbara and Burt Phillips Education Scholarship.

12
#17 Jolene Gooding 2022-11-14 16:47
Burt, so sorry to read about the passing of you wife. Roy and i send you and your family our sympathy during this difficult time. Know you are in our thoughts and prayers. Always, Jo and Roy
Report to administrator
#16 Cindy Barker 2022-11-11 08:45
Burt and Family, So sorry to hear about Barbara. Thoughts and prayers sent to you and your Family .
Report to administrator
#15 Susan Boschock 2022-11-10 21:31
Burt & Family,
I am so sorry to hear of Barb’s passing. She made me feel welcome when I came to Case Junior in 1885 and gave me encouragement in my new teaching position. She was so knowledgeable and loved what she did. I still remember her carrying that bag of books to the retired Case teacher’s luncheon at Ives Hill. You two were quite a pair- that will remain special to me.

Sue Boschock
May you find comfort in the wonderful memories you made together. God’s peace be with you.

Report to administrator
#14 Will &Ginnie Thesier 2022-11-10 11:02
Beth and family,
Our thoughts and prayers are with you and all your family during this time of great loss.
Report to administrator
#13 Marty Kinne 2022-11-09 15:27
I was so sorry to hear of Barb's passing. I remember how welcoming she was when I moved from Watertown High to Case Middle School back in 1981. She had a distinctive smile and joyous laugh that could brighten anyone's day. I never knew she was in the nursing profession, but I'm really not surprised. Caring for others was at the core of who she was. My thoughts and prayers go out to her family, especially Burt, her beloved husband of many years. The two of them were quite a team.
Report to administrator
#12 Susan Fitzgerald 2022-11-08 18:56
Burt and entire family, I am so very sorry to hear about
Barb’ passing. I remember her well from teaching at Case Middle school. My thoughts are with you at this difficult time.
Report to administrator
#11 Camilla Moore 2022-11-08 12:44
Bridgette,
Our love and prayers for peace for you and your family!