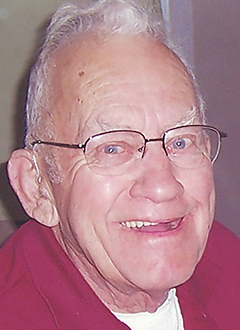 Vernon A. "Bud" Constance, 95, of Cape Vincent, passed away on Thursday November 24,2022 at the Samaritan Medical Center.

Bud was born in Watertown, New York on April 23, 1927, the son of Chester and Cora Aubertine Constance. He was educated at Sand Bay, St. Mary's and Cape Vincent schools. He entered the U.S. Navy on March 22, 1945, serving as a Seaman First Class and was discharged on April 26, 1946. He received the WW II Victory Medal, the American Theater Medal, and the Asiatic Pacific Medal, while serving on the Destroyer Louis Hancock at Pearl Harbor and the Philippines.

Vernon married Ruth E. Kilborn on April 7, 1949, at the St. Vincent of Paul Church in Cape Vincent with Rev. Patrick B. Riley officiating. In his early years he worked for the Town of Cape Vincent, General Crushed Stone, operated a dairy farm on the McKeever Road that he purchased from the Holiday brothers. He was employed by B.J. Ettinger as a cattle dealer for 19 years.

Bud attended St. Vincent of Paul Church in Cape Vincent and St. Mary's Church, Clayton. He was a member of the American Legion Post-832 and a 58-year member of the Cape Vincent Fire Department, serving 6 years as fire chief. Bud served 28 years on the French Festival Committee, many years as parade organizer. He enjoyed hunting with his grandson Michael, raising beagles and playing cards.

At his request there will be no calling hours. A Memorial Mass at St. Vincent of Paul Church, followed by Celebration of Life Gathering, will be held at the Cape Vincent Fire Hall at a time to be announced in the spring/summer of 2023. In lieu of flowers, donations can be made to the Cape Vincent Fire Department, P.O.Box-609, 241 East Broadway Street, Cape Vincent, New York 13618.

We are sorry to hear of your dad’s passing! He was such a fine man and he touched so many lives in a positive way. I called him Mr. Constance when I first met him through the fire department! He told me that his friends called him Bud! It was a pleasure to have known him and your family. May he Rest In Peace!