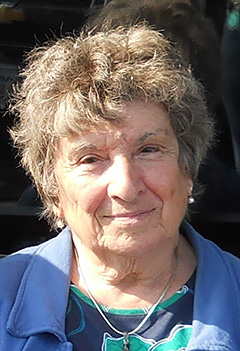 Jennie retired from the Jefferson County Board of Legislators after 42 years (1977 - 2019) serving Jefferson County and was honored on October 1, 2019 as the longest serving legislator in the State of New York. She was the 1st female elected to the Board of Legislators. She was a big supporter of Ft. Drum, the military, and Thompson Park. Jennie and Frank were recognized in 1987 for organizing volunteers to construct "A Place to Play'' children's playground.

Jennie was awarded the Shapiro Citizenship Award in 1988. She was a member and hostess for the Welcome Wagon for over 20 years, drove for Meals on Wheels, and was instrumental in the restoration of the Arsenal St. Cemetery and starting Citibus in the City of Watertown. She was raised in the Sand Flats, and was a former communicant of St. Anthony's Church where she sang in the choir. She was a communicant of Our Lady of the Sacred Heart Church for 70 years, where she was a Eucharistic Minister and also sang in their choir. Jennie enjoyed playing cards, especially a spirited game of Pinochle, sunsets at the Lake, cooking, sewing, baking, gardening, and crafts. Jennie was a devoted wife, mother, grandmother, and friend.

Calling hours and a service at Cummings Funeral Service, Inc., Watertown will be in May 2023. Times and dates will be announced.

In lieu of flowers, donations in Jennie's name may be made to Flower Memorial Library, 229 Washington St., Sisters of the Precious Blood, 400 Pratt St., and Meals on Wheels, 218 Stone St., all in Watertown, NY 13601. Online condolences to her family may be posted at www.cummingsfuneral.com.

#10 Midge Storino 2023-01-23 10:28
I was so sad to read about Jennies death. She was a wonderful person, sweet and kind. If I can remember I think I was a flower girl in her wedding. My thoughts
and prayers go out to her family. Midge Storino D,
Report to administrator
#9 Zina Soluri Ramey 2022-12-14 11:23
I knew Ms Adsit since I was a young girl. I first met her when I shoveled sidewalks. She was one of my best customers when she lived on the corner of S Rutland and Academy st. What a wonderful person she was. She will surely be missed. My thoughts and prayers to everyone who’s heart she touched.
Report to administrator
#8 Kathy Plante-Hunt 2022-12-12 20:34
I am praying for all of her family to find comforting.
Jennie was one of the sweetest souls around. She would call me out of the blue just to talk about nothing or everything and would always remind me if I ever needed help planting more bulbs at the Arsenal St. cemetery that she was around. If I needed help of any kind she made herself available.
She was one of a kind. There are angels in heaven but she was one of them that graced our paths. I will sorely miss her so much! To Jennie, I will see you in heaven for sure! Thank you for all that you did for everyone while on earth. Love, Kathy
Report to administrator
#7 tony soluri 2022-12-09 09:08
Our prays are with her and all the family , So sorry for your loss , Tony & Mary Soluri
Report to administrator
#6 Kathy Stevens 2022-12-08 12:43
Diane I am so sorry to hear of your Mom's passing. I would run into her every now and then and we had some great conversations. She was so full of life and so funny. I have some wonderful memories of being at your house when we were little. Jennie was always so welcoming.
Report to administrator
#5 Kathy Webster 2022-12-08 12:27
My deepest sympathies to Jennie’s family for their heartfelt loss. I worked with Jennnie and admired her loyalty to CitiBus for many years. As the Transit Supervisor I valued her input and continued support on the Transportation Commission. God Bless her and may she Rest In Peace.
Report to administrator
#4 Donna Pond McFaul 2022-12-08 08:45
Diane, my sincere condolences on the loss of your Mom. I know this must be a sad and strange time for you and I wanted you to know I am thinking of you….
Report to administrator
#3 paul fiegl 2022-12-08 06:40
Dear Adsit family

My deepest sympathies. Jennie was a nice person. God Bless. Paul N Fiegl
Report to administrator
#2 tina damon 2022-12-06 19:08
i was so sorry to hear of Jennie's passing. We were neighbors for over 20 years until i left Tilden St. Her & Frank were great neighbors & wonderful people. they were always very kind to me as well as to my children. I will forever remember their friendship.
Report to administrator
#1 Darrel Aubertine 2022-12-05 19:39
I was saddened to hear of Jennie’s passing, she was a trusted friend, a dedicated public servant, and a remarkable lady who made a positive impact in our community. I was privileged to have known her.
Report to administrator
Refresh comments list