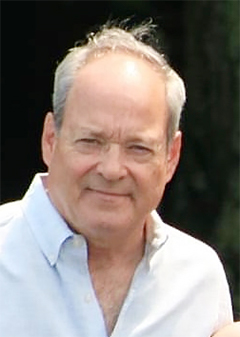 Gordon George Bonisteel passed away peacefully at his home in Clayton, New York, on December 12, 2022, surrounded by his family. A triplet, he was born in Ithaca, New York on July 18, 1956.

Gordon was a graduate of Watertown High School and Hartwick College in Oneonta, New York, where he earned a degree in Political Science in 1978.

On July 15, 1989, he married Julia Shaw Robinson at the Church of the St. Lawrence in Alexandria Bay. She and the River became his enduring loves.

In his professional life, Gordon joined his father, Rodney Bonisteel, and brother William in the grocery business after a number of years working in California. Together, they owned and operated Big M Markets in Adams, Sandy Creek, Boonville, and Watertown. He and William later opened South Jeff Wine and Liquors in Adams, New York.

Gordon was an active citizen in his community. A member of the First Presbyterian Church in Watertown, he served on various committees. He also served on the Board of Directors of the Brookside Cemetery in Watertown. In addition, Gordon served on the Planning Board of Appeals in Henderson, New York.

He loved sports, particularly skiing, snowboarding, and tennis, and was a member of the National Ski Patrol, overseeing the slopes at Dry Hill Ski Area for ten years. As Commodore of the Thousand Islands Park Yacht Club, he revitalized the sailing and kayak programs. In the summer, he was the Tennis Chair at the Grenadier Country Club in Rockport, Ontario, where he had many friends. Other River ties were to the Antique Boat Museum and the Chippewa Yacht Club in Chippewa Bay.

In addition to his family and the River, Gordon loved vintage cars, boats, and interesting old houses. He had a lifelong passion for restoring residences to their former beauty. Gordon was a wine connoisseur, and a raconteur with a fine, dry wit that could send the room into gales of laughter.

A celebration of Gordon’s life will be held at a date and time to be announced. A burial service at Brookside Cemetery will be held in the future. The Cummings Funeral Service of Clayton, New York is entrusted with arrangements. Online condolences may be posted at: www.cummingsfuneral.com. In lieu of flowers, donations in Gordon’s name may be made to Save the River, the Thousand Islands Land Trust, and Hospice.

123
#22 Harry McMillan 2023-01-16 18:19
What a loss for all of you. He was a great guy.
Report to administrator
#21 Barbarajean Blodgett 2023-01-05 21:37
I am saddened by the news of Gordon's passing. He was such a thoughtful, considerate, and caring guy. I was thrilled to work with him as a sponsor of the annual Watertown Students Art Show when I was still teaching. Gordon and Julia raised two wonderful sons and it was a pleasure to be their art teacher.
Sending Love and Light to Julia, the boys, and the entire Bonisteel family. May his memory be a blessing to us all.
Report to administrator
#20 Virginia Kasser 2022-12-29 19:11
Dear Julia,
I’m so sad to hear about Gordy! You and your family will be in my thoughts and prayers.

Love,
Ginny (your cousin)
Report to administrator
#19 John Walker 2022-12-28 08:00
Julia and family, we are so sorry for your loss. Gordon was a remarkable man and the dearest of friends.

Gordon was a fixture on the river and a presence in our lives that cannot be replaced. He will be greatly missed.