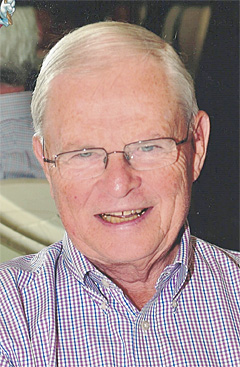 Bill was born September 6, 1930 to Dr. William Gordon Couch, a dentist, and Doris Glynn Couch, a homemaker. He had a brother George G. Couch, who died in 2020.

Bill attended Sherman Street School and Watertown High School, transferring his junior year to Tabor Academy in Marion, Massachusetts, graduating in 1948. He attended Williams College in Williamstown, MA, graduating in 1952 with a BA in English.

After graduation he enlisted in the United States Air Force and went to flight school in Moultrie, Georgia. He was stationed at Lubbock, Texas as an aircraft cadet and later was a B36 pilot at Carswell Air Force Base in Ft. Worth, Texas. He was discharged in 1956 and in 1957 married Margaret Ann Clay of Fort Worth. The two met on a hayride when both of their blind dates did not show up.

Bill began his business career in New York City as the assistant to G. H. Walker, the founder of G. H. Walker & Co, the uncle of George H. W. Bush, who made occasional visits to his Uncle Herbie's office.

After a year-long training program, Bill returned to Watertown to become a stockbroker with Foster & Adams. He was recruited to open an office for Spencer & Trask, located on the corner of Public Square in the current YMCA building. Through a series of mergers, Bill's career blossomed managing offices for Sandy Weil, with the firm eventually becoming Smith Barney, retiring in 2009.

Bill loved his community and believed in his volunteer activities. He was a member of Trinity Episcopal Church, serving on the Vestry. He was on the board of the YMCA, and particularly enjoyed his time as president of the board of the Northern New York Community Foundation. Bill also served on the board of the Syracuse Symphony Orchestra, the Black River Valley Club, the Jefferson County Historical Society, House of the Good Samaritan, the Nature Conservancy and Henry Keep Home.

Bill's special gift was that he lived every day with enthusiasm and a sense of adventure. He loved meeting new people, especially his children's friends, and thrived living a life of no regrets, making everyone he met feel as though they were the only person in the room.

Bill was an enthusiastic sportsman, enjoying skiing and SCUBA diving. He particularly enjoyed fishing and upland bird hunting. His fishing adventures took him from Labrador to Patagonia, Alaska, the Caribbean and the Ponoi Peninsula in Russia. His bird hunting travel was equally extensive with trips from Northern Canada to Argentina, South Africa, Scotland, and many years of hunting on Grenadier Island in Lake Ontario and Moultrie, Georgia.

In his last few years his favorite times were walking with his dog, Cassie, on his property in Clayton and Chaumont, and seeing his friends at his self designated "geezer" Wednesday lunches around Jefferson County.

Bill's family is particularly appreciative of the care provided to Bill, and Peggy, by Stephanie Lloyd and her team including Annie Shaw, Teresa Miller, Heather Weston and Holly Williams. Additionally, a big thank you to Andrea Paratore from Hospice. Bill is survived by his wife Margaret, his daughter Ellen C. Collins, his son William, Jr., (wife Kimberly) and his two grandsons Nicholas Briggs Couch and Jonathan Willam Couch, and a niece and nephews.

A funeral will be held at 11:00 on Thursday January 12 at Trinity Episcopal Church in Watertown. Donations may be made to the Northern New York Community Foundation, 131 Washington Street, Watertown, NY 13601.

Funeral arrangements are entrusted to Cummings Funeral Service, Inc. of Clayton and Watertown. Online condolences to his family may be posted online at www.cummingsfuneral.com.

Beth and I wish to express our sincere condolences for the lose of your dear husband and father. Bill was a friend to many and we consider ourselves in that group. Please know that if we weren’t in Florida, we would be present with you today. You can take solace in knowing that he is now “up there” with Pop and many of the other “geezers” having a “Pino” and laughing contagiously.
Our love to you all. God bless.

I am so sorry to hear of your loss.
Bill was great man - always had the best of attitudes. He was instrumental in both my father’s and my own business career - we will always appreciate him for giving both of us our starts.

Our condolences to your family.

So sorry for your loss. Your Dad was a great guy and very generous with his knowledge, time and helping others. My condolences.