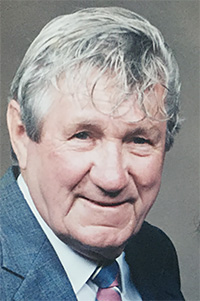 Vernon F. Taylor, 87, formerly of Watertown, passed away peacefully on September 9, 2016 at his home in Hamburg, NY, surrounded by his loving family and under the care of Hospice.

Mr. Taylor was one of ten children born to the late Ambrose W. Taylor and Mary Ward Taylor on October 13, 1928. He attended Watertown schools, later joining the Air Force and was stationed in Germany, Alaska and Alabama. Upon his discharge, he joined the Watertown Police Force. On March 2nd, 1957, Vernon was married to Alice M Blair. They were married for 59 years.

He then worked for Roy Seeber Roofing until he and his brother Jim established Taylor Brothers Painting and Sandblasting, often joined by brother Tom. He later started his own business, Vern Taylor Painting. Throughout his life he donated his time and talent to various church and community projects. In 1974 he and his brothers received an Apostolic Blessing from Pope Paul VI for their work done on St. Patrick's Church.

Mr. Taylor and his wife began their journey in the Watertown area. In 2007 they moved to Jonestown, PA where they resided until this past June when they moved to Hamburg, NY to be closer to their children. They were both communicants of Holy Family Church and, more recently, of St. Francis Church in Hamburg, NY.

Vernon was a member of the American Legion and the Elks Club. He loved riding motorcycles and racing stock cars in his younger years. He was a dedicated golfer and bowler, playing on area leagues. His personality was full of life. He and his brothers often provided skits and musical entertainment for the older residents of area high rises, under their mother's direction. Vernon was well known to break into an Elvis Presley or John Wayne impersonation to the delight of all who knew him. He enjoyed singing so much, he'd entertain students at a local school.

His last years were filled with fun and laughter with his beloved grandchildren. He left his loved ones with his uncompromising faith in God and fierce love of family, and his ability to laugh through the toughest of times. For this his family will be forever grateful.

He is survived (and greatly missed) by his wife and six children, Sheela Marie and her companion Timothy Canaan of Watertown, Leigh Ann (Robert) Lawrence and Kelly Cook of Oldsmar, FL, Greg Taylor of Jonestown, PA, Julia Santoro of Hamburg, NY and Michelle Lammers of Fairbanks, AK. He was blessed with 17 grandchildren, 10 great-grandchildren, and 2 dogs, Missy and Jordan, who enriched his later years.

Also surviving him are sisters Olga M. Sennett of Watertown, Margaret A. Sexton of Palm Harbor, FL and Katherine Doe Johnson and husband Donald of Watertown, a brother James P, Taylor of Palm Harbor FL, and numerous nieces and nephews. He was predeceased by four brothers, Harvey A., John F., William A. and Thomas L. A sister Kathleen D. died in infancy.

Donations can be made to a charity that he was a fan of, Operation Smile, P. O. Box 5017, Hagerstown, MD 21741 or at http://www.operationsmile.org./ Online condolences to his family may be made at www.cummingsfuneral.com.