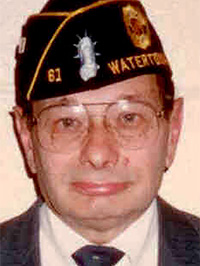 Calling hours will be held at Cummings Funeral Service, Inc., 214 Sterling St., Watertown on Friday, December 9, from 5 - 7PM. The funeral mass will be celebrated at Holy Family Church at 10AM on Saturday, December 10, with Rev. Steven Murray, pastor, presiding. Burial with military honors will be in Glenwood Cemetery.

Roy was born in Nanticoke, PA on November 16, 1927, son of Joseph and Thelma Bennett Remus. The family moved to Watertown and he attended schools there.

On February 13, 1946 he entered the US Army and was discharged on November 18, 1947. He then reenlisted on October 12, 1950 and was honorably discharged on March 11, 1952. While serving his country, he received the WWII Victory, Army of Occupation and Korean Service Medals.

He was a warehouse foreman for many years at Bradley Hardware. Roy was a communicant of Holy Family Church and a member of its Legion of Mary. He was a member of American Legion Post 61, VFW Post 1400, and a former member of Elks Lodge 496. Music was a very important part of Roy's life. He was a member of the Watertown Civic Band and played Taps for many a Veteran. He, with his father, were members of a 4 piece band and after his father died, he renamed the band Rojax and played for another 40 years.

Donations in his name may be made to Holy Family Church, 129 Winthrop St., Watertown, NY 13601 or to a charity of your choice. Online condolences to his family may be made at www.cummingsfuneral.com.