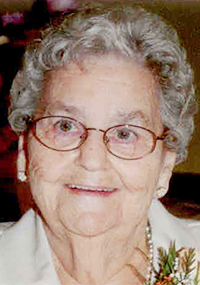 Doris P. Swallia, 92, formerly of Depauville, Cape Vincent, and Dexter, passed away Thursday morning, June 22, 2017, at Samaritan Summit Village, Watertown where she had resided since October 2013.

Calling hours will be held at Cummings Funeral Service, Inc., Clayton on Tuesday, June 27, from 4 - 7PM. The funeral service will be at the funeral home on Wednesday, June 28, at 10AM with Pastor Thomas Augliano, River Community Church, presiding and burial will follow in Depauville Cemetery.

Mrs. Swallia was born June 27, 1924 in Watertown, daughter of Joseph and Jessie (Schafer) Mexdorf and she was raised in Depauville. She was a 1941 graduate of Clayton High School and attended nursing school in NYC until illness brought her back home. On June 27, 1945 she married Clarence C. "Clancy" Swallia. They resided on Swallia Rd., Cape Vincent most of their married life, where Mr. Swallia owned and operated Swallia Electric. After their retirement, they moved to Dexter where they lived until Mr. Swallia passed on May 13, 2001. She moved to Watertown after his passing.

Doris had worked at Bomax until 1968. She then worked and retired in 1987 from Thousand Islands Central School cafeteria while she was a bookkeeper for her husband's business. She was a member of the Three Mile Bay Baptist Church choir, singing at many weddings. For most of her life, she enjoyed knitting, game shows, listening to Joel Osteen, watching SU Basketball, and spending time with family and friends. She never turned down the opportunity to play any game of cards no matter what time of day. She was a great cook and would feed any number of unexpected guests at a moment's notice. As a grandmother she attended the majority of her grandchildren's activities in and out of school.

"May the angels take you to meet your loved ones who wait for you to be with them again." Donations in her name may be made to Ed Beerman, Jr. Scholarship Fund, Watertown Savings Bank, attention Linda Paventi, 12221 NYS Rt. 12E, Chaumont, NY 13622. Online condolences to Doris' family may be made at www.cummingsfuneral.com.

#8 Brittany hunt 2017-06-26 20:55
Doris was such a wonderful woman.!! I admired her everyday, and I will miss her so much.! She is and always so very dear to me. I'm so glad I got the chance to know her and care for her. Now she's pain free and with her husband she loves so much.
Report to administrator
#7 Cathie Garrett Davis 2017-06-26 18:50
Linda and Family
Sorry to read of the passing of your Mom. Sending prayers to you and the Family.. Your Mom and Dad were special people..
Cathie