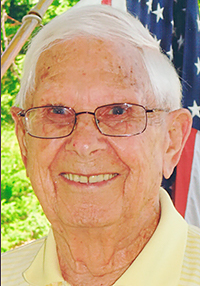 Richard G. Bertrand, 101, James St., Clayton passed away with his family by his side on Monday, July 10, 2017, at Samaritan Summit Village where he had resided since January 23.

Calling hours will be held at Cummings Funeral Service, Inc., Clayton on Sunday, July 16, from 2 - 5PM. A prayer service will be at the funeral home on Monday, July 17, at 10:15AM followed by the funeral mass celebrated at St. Mary's Church at 11AM with Rev. Arthur J. LaBaff, pastor, presiding. Burial will be in St. Mary's Cemetery.

On November 5, 1943 he enlisted in the US Army, serving in Company B 120th Infantry. He saw service in Rhineland and Ardennes and received the European African Middle Easter Theater Ribbon with two bronze battle stars and Combat Infantry Badge. He was honorably discharged on December 6, 1945.

Dick was a postal carrier for the US Postal Service, became Postmaster, and retired after 35 years of service. He was a communicant and trustee of St. Mary's Church, and he was a 101 year member of the parish. He was a Bishop Conroy General Assembly 4th Degree Knights of Columbus and was a member of Knights of Columbus Council 350 since 1933. He had been a member of American Legion Post 61 since 1945 and had held many local and State offices. Dick was involved in starting the Clayton Housing Authority, was Chairman of the organization for many years, and was still serving on the Board of Directors at the time of his death. He enjoyed golf and was instrumental in starting the Senior Men's Golf League, which is now named the Dick Bertrand Senior Golf League. He had been its secretary and treasurer and played golf until he was 96.

He is survived by his son, Richard C. Bertrand and wife, Patti, Clayton; daughter, Gayon B. Meyer and husband, John F., Liverpool; nine grandchildren, fifteen great grandchildren, and three great great grandchildren; and numerous nieces, nephews, and cousins. Along with his wife, Virginia, Dick was predeceased by his brother, John A. Bertrand, and sister, June Marie Thompson.

Donations in his name may be made to St. Mary's Church, 521 James St., Clayton, NY 13624. Online condolences to his family may be made at www.cummingsfuneral.com.