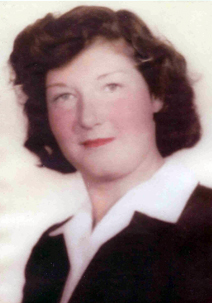 Madgel Mae Brown, 94, of Brown Rd., Grindstone Island, passed away Sunday, August 20, 2017 at the home of her daughter and son-in-law, surrounded by her family.

Calling hours will be held at her daughter and son-in-law's home, Brenda and Patrick Patch, 10598 County Rt. 9, Cape Vincent, on Friday, August 25, from 2 - 6PM. The funeral service will be on September 7 at 1PM at Grindstone Island United Methodist Church with Rev. Jeffrey J. McArn presiding. Burial will follow in Brown Family Cemetery. Arrangements are entrusted with Cummings Funeral Service, Inc., Clayton.

Madgel was born in Carthage on July 23, 1923, daughter of Clarence W. and Nina Mae Matthews Garnsey and she was educated on Grindstone Island. On September 19, 1946 she married Ernest J. "Junie" Brown in the parsonage of the Depauville Methodist Church with her great uncle, Rev. Robert Wright, officiating. Junie died December 12, 2002.

With her husband she ran the family farm on Grindstone Island and raised seven island brats. She was a member of Grindstone Island United Methodist Church and a life member of Dodge Hall. She had been an active member of the Ladies Aid Society and Grindstone Island Research and Heritage Center. She enjoyed cooking, baking, canning, ice skating, country music, her "soaps", reading, and bird watching. She also enjoyed collecting Island memorabilia and afternoon coffee with the golden girls.

Donations in her name may be made to either Dodge Hall, c/o Sara Matthews, 14972 Lovers Lane, Clayton, NY 13624 or Hospice of Jefferson County, 1398 Gotham St., Watertown, NY 13601. Online condolences to her family may be made at www.cummingsfuneral.com.