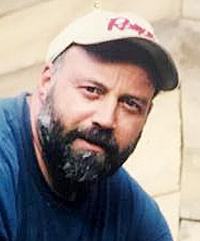 Mark William Hummel passed away at home with his family at his side on October 1, 2017 after a long battle with cancer.

He was born September 10, 1957 in Syracuse, son of William A. and Gertrude Embesi Hummel. Mark has lived and worked on the St. Lawrence River for the past 25 years after falling in love with the area during family vacations. He was a gifted craftsman and has left his stamp on many river projects.

Mark is survived by his wife, Kathy, and beloved daughters, Maureen and Grace and, if only by marriage, his treasured son, Dennis. His cousin Jimmy and niece Margaret reside on Grenell Island, Clayton and hold a special place in Mark's heart. Also surviving are Mark's mother, Gertrude, his brother and wife, Stephen and Heather Hummel, nephews, Nicholas and Timothy, and brother, Patrick Hummel.

A memorial service will be held at St. Mary's Church, Clayton at 11:00AM on Thursday, October 5, 2017 followed by lunch at the Hummel's home on Kehoe Tract Rd., Clayton. All are invited to attend. There will be no calling hours and arrangements are entrusted with Cummings Funeral Service, Inc., Clayton. Donations may be made to Hospice of Jefferson County, 1398 Gotham St., Watertown, NY 13601. Online condolences to his family may be made at www.cummingsfuneral.com.