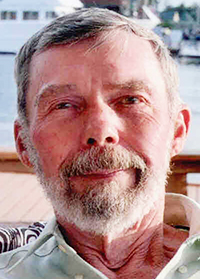 Howard L. "Bud" Halberg, 84, Rich Rd., Watertown passed away with his family at his side on Thursday morning, October 19, 2017, at Hospice of Jefferson County.

A funeral service will be held at Cummings Funeral Service, Inc., Watertown on Tuesday, October 24, at 11AM with Rev. Jonas Tandayu, pastor of Our Lady of the Sacred Heart Church, presiding followed by burial in North Watertown Cemetery. There will be no calling hours.

Howard was born in Macomb on September 24, 1933, son of Oscar and Marjorie Kelly Halberg, and graduated from Watertown High School in 1951. On November 15, 1953 he married Shirley E. Williams at Trinity Episcopal Church with Rev. Sudlow officiating.

He entered the US Army on July 30, 1953. He received the National Defense Service, Good Conduct, Korean Service, and United Nations Service Medals. He was honorably discharged on July 27, 1956. Howard worked as a toolmaker for NY Airbrake, retiring in 1994 after 45 years of service to the company. He attended Our Lady of the Sacred Heart Church and was a life member of International Assoc. of Machinists & Aerospace Workers Lodge 761. He enjoyed hunting, fishing, logging, camping, and any type of outdoor activity.

Along with his wife, Shirley, he is survived by his four children, Karen M. Reff and husband, Daniel, Calcium, Scott H. Halberg, Lake Bonaparte, Jeffrey A. Halberg and companion, Renee Cook, Watertown, and Lisa A. Eddy Barre and husband, Brian, Watertown; four grandchildren, Kylie, McKenzee, Lacie, and Kevin, and six great grandchildren; brother, James L. Hinker, Syracuse. His other brother, Robert A. Halberg, died before him.

In lieu of flowers, donations in his name may be made to Hospice of Jefferson County, 1398 Gotham St., Watertown, NY 13601 or a charity of your choice. Online condolences to Howard's family may be made at www.cummingsfuneral.com.