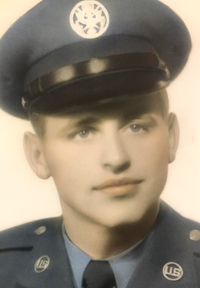 The funeral service will be held at the convenience of the family with Rev. Thomas Augliano, co-pastor of River Community Church, officiating. A celebration of his life will be held at the Knights of Columbus, Clayton on Saturday, November 4, noon to 4:00. There will be no calling hours. Arrangements are entrusted with Cummings Funeral Service, Inc., Clayton

Wayne was born in Clayton on November 22, 1929, son of Wilbur E. and Laura M. Scott Youngs, and he was a 1948 graduate of Clayton High School. He entered the US Air Force on October 11, 1950. He received the Korean Service, United Nations Service, and National Defense Service Medals and was honorably discharged as a Staff Sergeant on October 11, 1954.

After he was honorably discharged from the service, he drove truck for Tommy Kapples Trucking Co. He then worked as a draftsman for the Sealright Co. in Fulton, NY and Canton, Ohio. After returning to Clayton, he worked briefly for the New York Air Brake Co., Newton Falls Paper Mill and returned to the New York Air Brake where he retired after 22 years as a Master Electrician.

Wayne was raised as a member of the Baptist Church. He was also a member of the International Assoc. of Machinists and Aerospace Workers, American Legion Colon-Couch Post 821, and the Clayton Fire Dept., where he was a member of its Calumet Racing Team. Wayne had a successful high school sports career, which resulted in his early nickname of "Butterfly" for his speed on the football field. He remained active after high school, participating in border league basketball and in local Fast-pitch softball leagues.

Upon returning to Clayton, he remained active in bowling leagues, and coached slo-pitch softball for the Christian Hill Bandits. He was an avid outdoorsman – hunting, fishing, spending time in Barnes Corners which resulted in him acquiring a camp known as the 7 x 9 Hilton where "Wayne Baby" entertained many family, friends and unplanned guests that would eventually become lifelong friends. He enjoyed four wheeling, working on many projects and NASCAR. He was very passionate about his well kept and bountiful garden at "The Shack" where he spent a lot of his time in the summer. He was a devout Syracuse Orangemen and NY Yankees fan.

In lieu of flowers, the family wishes donations in his name to Clayton Fire Department, 855 Graves Street, Clayton, NY. Online condolences to Wayne's family may be made at www.cummingsfuneral.com.