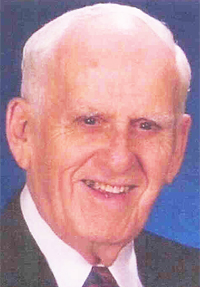 George Boyle Towsley, 94, Pratt St., Watertown died Friday evening, November 3, 2017. He was born October 14, 1923 to George J. and Brigid Boyle Towsley. He was a graduate of Immaculate Heart Academy and the University of Detroit. He married Mary Alice Stumpf on September 12, 1953 in St. Patrick's Church with Rev. Eugene A. Kelly officiating.

George was drafted into the US Army while attending the University of Detroit in February 1943 and started his World War II service at the Finance Office Training School at Ft. Benjamin Harrison, IN. Subsequently, he was assigned to the Finance Offices in Brisbane, Australia, Port Moresby and Hollandia, New Guinea, and General MacArthur's Headquarters in Manila, Philippines. He attained the rank of Master Sergeant and was Chief Clerk in the 240th Financing Disbursing Section in General MacArthur's Headquarters.

Upon returning from military service, he continued his education and graduated from the University of Detroit in 1948. He joined the Detroit CPA firm of Lybrand, Ross Bros. &  Montgomery in June 1948. In 1952 he returned to Watertown as Assistant Controller of the NY Airbrake Co. In 1968, he set up his CPA practice in Watertown and in 1981 was joined by Keith Gardner, CPA. The partnership maintained its public practice until its merger with Dragon, Benware and Co. in 1991. He left the firm in 1996 and resumed a private CPA practice in his own name in 2001, and continued until his death.

Active in community affairs, he served as Chairman of the Board of Advisors of the former Mater Dei College, Chairman of the Advisory Board of the Salvation Army, Finance Officer of the Watertown American Legion Post 61, and Chairman and Treasurer of the IHC School Board. George was a charter member of the Advisory Board of the Watertown Office of Catholic Charities, Trustee of St. Patrick's Church, and a founding member of St. Joseph Cupertino Fraternity of the Third Order Secular of St. Francis. He was a member of the New York State Society of CPAs, a charter member of the National World War II Museum, and a life member of Ives Hill Country Club.

In 2005 he was awarded "Senior of the Year" by the Jefferson County Office For the Aging for his work in the Ombudsmen Program sponsored by that office. In May of 2006, he was honored in Albany with other senior citizens by then Governor George E. Pataki at the New York State Senior Citizens Day.

Calling hours will be held at Cummings Funeral Service, Inc., Watertown on Tuesday, November 7, from 2 - 4PM. A prayer service will be at the funeral home on Wednesday, November 8, at 9:15AM followed by the funeral mass celebrated at St. Patrick's Church at 10AM with Msgr. Paul Whitmore presiding. Burial will be in Glenwood Cemetery.

In lieu of flowers, donations in George's name may be made to the Precious Blood Monastery, 400 Pratt St., Watertown, NY 13601. Online condolences to his family may be made at www.cummingsfuneral.com.