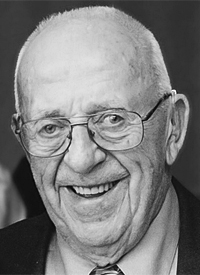 Joseph M. Reff passed away at his home in the Town of Cape Vincent on Tuesday morning, December 12, 2017.

So that his family have time to gather, a calling hour will be held on Saturday, June 9, 2018, at St. Vincent de Paul Church, Rosiere, from 9:30 - 10:30AM followed by the funeral mass celebrated at 11AM in the church. Burial will follow the mass in the parish's cemetery.

Joe was born in the town of Cape Vincent on March 5, 1930, son of Neil and Muriel Mason Reff. He was a 1948 graduate of Cape Vincent Central School. On January 6, 1951 he married Jeanne Johndrow in St. James Church, Carthage with Fr. Dacey officiating. Mrs. Reff passed on July 24, 2017.

Joe was a dairy farmer for 25 years after his father passed away, at the home farm in the town of Cape Vincent. After his son Mike and grandsons Terry and Tim purchased the farm, he was employed for many years for Donald J. Wood Construction, and retired as Clerk of the Works for Two Plus Four Construction building senior citizen apartment complexes.

Joe was a life-long communicant of St. Vincent de Paul Church and a 69 year, 3rd Degree member of Knights of Columbus, LeRay de Chaumont Council 2148, serving as Grand Knight twice. He served 8 years on the Cape Vincent Town Council, was the voting machine custodian for Cape Vincent for many years, served 14 years as a member of the Board of Directors for The Citizens Bank of Cape Vincent, and 6 years on the Thousand Islands Central School Board of Education. He was currently a member of the Sons of the American Legion Post 832, the Community Advisory Board for Cape Vincent Correctional Facility, and the Cape Vincent Assessment Review Board.

With his wife, Jeanne, Joe was a member of the "Lunch Bunch." They were volunteers for over 10 years at Samaritan Medical Center. He enjoyed carpentry, four-wheeling, and his cocktail hour with his children, grandchildren, and great grandchildren. With his grandson, Jarrod, he donated materials and designed and built the winning Klondike Sled with Cape Vincent Boy Scout Troop 56. He was an life-long New York Yankees Baseball, Syracuse University Orange Basketball, and Green Bay Packers Football fan.

In lieu of flowers, contributions in his memory may be made to Cape Vincent Ambulance Squad, PO Box 609, Cape Vincent, NY 13618. Online condolences to his family may be made at www.cummingsfuneral.com.