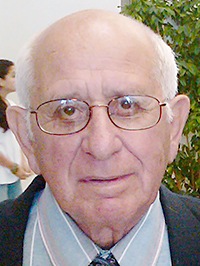 Dr. John S. Eppolito (Doc) died peacefully with his children by his side on February 18th, exactly 18 years since his wife Betsy left his side. Doc spent the last year of his life under the excellent care of the entire staff at the Samaritan Summit Village in Watertown, NY.

Doc had a long, joyous and purposeful life. He was born on June 7,1933 in Granville, NY to Samuel and Anna (Cavoretto) Eppolito. He grew up in Granville with his 2 sisters, Marina and Bettina, and graduated from Granville High School.

Doc got his undergraduate degree from the University of Rochester as a ROTC candidate and attended the University of Pennsylvania Dental School where he met his wife, Betsy Beaudry, whom he married on August 24, 1957.

He entered the US Navy as a Lieutenant on July 13, 1958. Following his graduation from dental school with his DDS (Doctor of Dental Science), he and Betsy moved to Oahu, Hawaii where Doc was stationed as a US Navy dentist. While enjoying the beaches and sunny days of their early years together in Hawaii, Doc and Betsy had the first two of their 7 children, Joe and Paul. They left Hawaii bound for Bethesda, Maryland. Once in Maryland, four more children arrived. Twins Kathy and Mary were born in December of 1960 followed 11 short months later by another set of twins, Matt and Mike. He was honorably discharged from active duty on August 2, 1962, and from the Naval Reserves on February 23, 1971.

While in Maryland, Doc was asked by Robert Fitzgerald and Edward Maloney, two dental school friends, to join their practice in Clayton, NY. Doc and Betsy decided to move their 6 young babies to northern New York and settle into the small river community. They found a place to live on Merrick Street in a neighborhood affectionately named “The Ghetto” because of the number of children that lived there. Once he was established in Clayton, Doc began his devoted and tireless public service to the river community and beyond. In November of 1968 his family got larger as their 7th child Peter was born.

Doc was always involved in all aspects of his children’s life. This included being a member of the Board of Education, the Clayton Youth Hockey Association, Clayton Youth Commission, and the American Field Service, where his family hosted an exchange student, Erich Strolz from Austria, for a year. His focus was to make sure the youth of Clayton were behaving and doing their best!

In addition, he was involved with numerous service organizations such as the Lion’s Club where he dressed as a clown for parades and as Tiny Tim in the Lions Roar shows. As a former Navy dentist he joined the American Legion Colon Couch Post 821. He was an active member of the Knights of Columbus Council 350 where he worked Bingo, the Clayton Fishing Derby and the Antique Boat Show for years. In later years, Doc became very active in the TI Museum, enjoying, attending and helping with History at Noon talks, the Duck Decoy Show and many other events. He served on the Board of the River Hospital (E.J. Noble) in Alexandria Bay for many years, and was a member of the Thousand Islands Foundation, which was responsible for awarding college scholarships to local graduating high school seniors. Because of his service and commitment to the Village of Clayton he was named Citizen of the Year in 1986.

In both his professional and personal life, Doc was overly generous and kind. He never refused to see a patient regardless of the time of day or financial status. He donated to nearly every non-profit that would send him a request regardless of the cause.

Most of all, Doc was a loving husband, father and a great friend to many. He will be greatly missed and fondly remembered by all who knew him.

Calling hours will be held at Cummings Funeral Service, Inc. on Friday, February 23, from 3 - 8PM. The funeral mass will be celebrated at St. Mary’s Church on Saturday, February 24, at 11AM with Rev. Arthur J. LaBaff, pastor, presiding followed immediately by an open house at the Knights of Columbus Hall in Clayton. The family requests that in lieu of flowers, donations can be made in his name to The TI Museum, 312 James St. or Saint Mary’s Church, 521 James St., both in Clayton, NY 13624. Online condolences to his family may be posted at www.cummingsfuneral.com.

#1 Cheryl ames 2021-04-24 23:38
Doc was my dentist since I was five, even after I married and moved to potsdam me and my three children saw him twice a year till he retired. We all thought he was just wonderful
Report to administrator
Refresh comments list