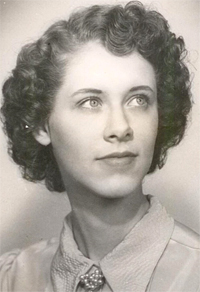 Ann B. Northrop, 85, a Watertown resident for over 60 years, passed away Tuesday morning, January 8, 2019, at Hospice of Jefferson County.

Calling hours will be held at Cummings Funeral Service, Inc., Watertown on Friday, January 18, from 4:00 - 7:00 PM. The funeral service will be at the funeral home on Saturday, January 19, at 11:00 AM with Rev. Walter Giles presiding.

She was born Ann Marie Brower in Watertown on September 21, 1933, daughter of the late Clarence Burt Brower III and Ethelwyn (Peg) Smith Brower. She grew up and attended public schools in Rochester and attended Eastman School of Music. She married James L. Harrington on February 9, 1952 in Rochester. They had three children and were divorced in 1963. Dr. Harrington died November 18, 2015. Ann married Squire Brown Northrop, Jr. on June 29, 1964 and he died June 3, 2006.

Ann is survived by her two sons and their wives, James and Christie Harrington, South Orange, NJ and David and Marcia Harrington, Watertown; her daughter and her husband, Kathleen and John Michael, Watertown; seven grandchildren and ten great-grandchildren. She is also survived by the family of S. Brown Northrop. Along with her parents and husband, she was predeceased by her companion, Fred Haggerty, January 17, 2016, and her brother, James A. Brower.

Mrs. Northrop worked most of her adult life as a piano and voice teacher. She was very active at both Trinity and St. Paul's Churches. A member of their choirs, she was on the vestry of both churches and had served as Warden at Trinity Church. She was a long-time member of Morning Musicals, Northern Choral Society, Little Theater, and Lyric Theater. She played several major roles and also directed Carousel.

There is much to be said regarding Ann’s character, talents, and gifts that she shared so freely with our community. She was the ultimate embodiment of a benevolent matriarch, a trusted and beloved friend, and an educator held in the highest esteem by her students. We are all exceedingly fortunate to have had Ann in our lives, and to have our existence coincide with hers. As a dear friend of hers said, upon learning of her death: "She'll sing in my heart forever."

The family expresses heartfelt thanks to the special caregivers and staff at both Samaritan Summit Village and Hospice of Jefferson County for their professional care and compassion. In lieu of flowers, donations in Ann's name may be made to Hospice of Jefferson County, 1398 Gotham St., Stage Notes, attn. Ticia Aumell, 131 Washington St., Suite 310, Watertown Lyric Theater, through NNY Community Foundation, 131 Washington St., or the Ann Northrop Never Walk Alone Scholarship, through the NNY Community Foundation, 131 Washington St., all in Watertown, NY 13601. Online condolences to her family may be posted at www.cummingsfuneral.com.