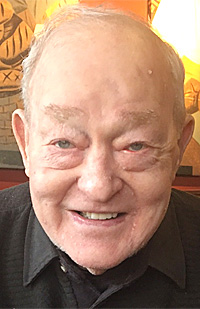 Lee Combs, 87, passed away on Wednesday, February 27, 2019 at the Hadlow Center in Jacksonville, Florida.

Lee was born on August 19, 1931 in Jackson, Kentucky, the fifth son of the late Bill and Mary Combs. He attended high school in Wattsburg, Pennsylvania where he played basketball and baseball.

Upon his high school graduation in 1948, at the young age of 17, he enlisted in the United States Navy. He was honorably discharged in 1950 to take care of his dying mother. In that same year, he enlisted in the Air Force and fought in the Korean War. Combs was a member of the 655 A/C West Squadron and stationed in Dry Hill. After completing his service, he was honorably discharged in 1954.

Combs began his employment at Niagara Mohawk in 1955. He held both the presidency and steward positions of the IBEW Union Pension Club. After 40 years of faithful service to the company, he retired in 1993 as a line supervisor.

Throughout his life, Lee was an avid lover of sports, especially local sports team in the community. He coached several Holy Family and Case Junior High basketball teams, the Hall Ski Lift Midget baseball team, and was a basketball official for over 20 years. He was a talented athlete in his own right, and was competitive in basketball leagues, horseshoes, NiMo summer picnic races, and golf. When he wasn't competing or coaching, Lee loved to watch his own children and grandchildren, as well as those in the community, compete in athletics. He spent his summers with his family in Ramsey Shores.

Friends may call at Cummings Funeral Service, Inc. in Watertown on Thursday, March 7, from 5-7pm. A funeral mass will be celebrated at Holy Family Church on Friday, March 8 at 11am with Rev. Steven Murray, pastor, presiding followed by burial in Glenwood Cemetery. Condolences may be sent to www.cummingsfuneral.com. In lieu of flowers, please consider donations to the St Baldrick’s Foundation.