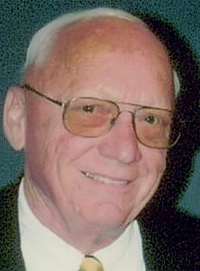 A memorial service will be held at St. Anthony's Church on Wednesday, April 17, at 1 pm with Fr. Donald Robinson presiding. Burial will be at the family's convenience. There are no calling hours and arrangements are entrusted with Cummings Funeral Service, Inc., Watertown.

Jay was born in Watertown on September 18, 1937, son of John H. and Eunice Ball Stone. He received his bachelor's degree from Canton College. He proudly served in the US Navy from 1955 to 1958, and one of his stations was aboard the USS Layte. On August 21, 1961 he married Dawn Derrigo.

He was the owner and operator of Hyde-Stone Mechanical, Inc., Watertown. He was a current member of SUNY Canton Foundation, JCC Foundation, Plumbing, Heating & Piping Contractors of NNY, NNY Builders Exchange and on its Board of Directors, and the Watertown Rotary Club. Jay was a former member of the NNY Community Foundation and the Gov. Flower Monument Centennial Committee. He was a licensed plumber for the City of Watertown. For nine years he was Chairman of the YMCA Board in Milford, CT. For relaxation Jay enjoyed yard work.

In lieu of flowers, the family wishes donations in Jay's name to either Hospice of Jefferson County, 1398 Gotham St. or NNY Community Foundation, 131 Washington St., both in Watertown, NY 13601. Online condolences to his family may be posted at www.cummingsfuneral.com.

#4 Amanda Cole Dixson 2019-04-15 11:04
My thoughts and condolences to the Stone family. Jay was a very intelligent and great man.
Report to administrator
#3 Joseph Escudero 2019-04-15 11:02
Jay was the classiest person I've ever met.The community will miss him dearly. When a solider was having lunch at Shorty's Jay would ask the waitress for their check no matter if there was 20 or 1. He had an amazing memory and was a great businessman with a soft heart for those in need. I saw what he did for a 9-year old in Carthage with Leukemia he didn't even know. Very honored to have known him, he was the best!
Report to administrator
#2 Dezirae brooks 2019-04-14 19:44
Jay was a wonderful man always so kind. I loved his morning conversations and coffee when he came into the store. I loved sharing my ultrasounds with him and watching him smile and the stories he would tell me about his kids growing up. No matter how scared I was he always told me I could do it. He was a great friend who left a life time mark on my heart. Thanks Jay for all the smiles and words of encouragement you gave me. You will be missed so much.
Report to administrator
#1 Mary Huse 2019-04-14 19:11
My most heartfelt condolences go out to Dawn and their family. Jay was one of my favorite members of the Canton College Foundation Board of Directors. He was always eager to serve, and his great sense of humor will always be remembered. I am deeply saddened to hear this news.
Report to administrator
Refresh comments list