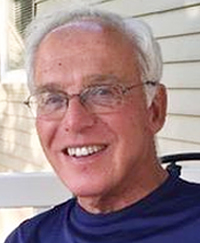 A graveside service will be held in Clayton Cemetery on Saturday June 1st, 2019 at 11:00 am with military honors. There are no calling hours and arrangements are entrusted with Cummings Funeral Service, Inc., Clayton.

He was a member of the United States Coast Guard, entering on Feb, 12, 1961, serving over 30 years and was placed on the retired reserve list on April 27, 1998 in the rank of Commander/0-5. He was Plant Manager for Blue Seal Feeds, first in Arcade and then in Watertown for a total of 28 years, serving Watertown for 13. Chuck enjoyed his life on the river which included boating, hunting, woodworking, and especially spending time with his daughter and grandchildren. Chuck was a longtime supporter of and volunteer at the Antique Boat Museum in Clayton, NY. He served in a wide variety of roles, primarily as a fully credentialed captain aboard the museum's in-water fleet.

In lieu of flowers, donations may be made to The Antique Boat Museum 750 Mary Street, Clayton, New York 13624. Online condolences to his family may be posted at www.cummingsfuneral.com.

#1 Geprge, Miriam Bowes 2019-05-27 20:42
Chuck was a good friend and will be missed by us. We always enjoyed visiting with him either at his home or ours. We had been friends for over forty years and worked together in Real Estate. Our thoughts and prayers to Sherri and family.
Report to administrator
Refresh comments list