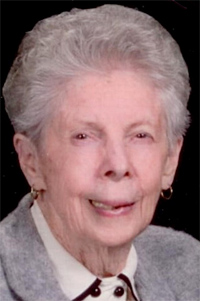 Pauline H. Scofield, 97, of Watertown passed away Tuesday, May 28, 2019, at Samaritan Summit Village. The family would like to extend their thanks to the staff on the 4th floor for their care and devotion.

The funeral service will be held at Cummings Funeral Service, Inc., Watertown on Tuesday, June 4, at 10 AM followed by burial in North Watertown Cemetery. There will be no calling hours.

Pauline was born in Watertown on August 10, 1921, daughter of the late Ned S. and Blanche Durand Howell. She was a graduate of Watertown High School and Mercy Hospital School of Nursing. On September 12, 1943 she married Robert H. Scofield at Trinity Episcopal Church with Rev. Middleton officiating. Mr. Scofield died on September 22, 1982.

She worked as a Registered Nurse at the House of the Good Samaritan, now Samaritan Medical Center, and for the Department of Social Services as a case worker. She was a member of Trinity Episcopal Church, and its Altar Guild, choir, and Girl's Friends Society. Pauline enjoyed the St. Lawrence, knitting, sewing, skiing, and her life was all about her family.

In lieu of flowers, donations in Pauline's name may be made to Hospice of Jefferson County, 1398 Gotham St., Watertown, NY 13601. Online condolences to her family may be posted at www.cummingsfuneral.com.