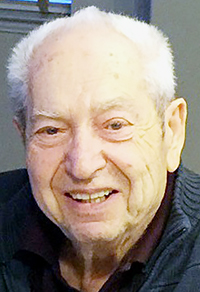 Calling hours will be held at Cummings Funeral Service, Inc., Watertown on Monday, July 1, from 5 - 8 PM. The funeral mass will be at St. Vasilios Greek Orthodox Church on Tuesday, July 2, at 11 AM with Rev. Philip Yanulis presiding, followed by burial in Brookside Cemetery.

Dino was born in Thessaloniki, Greece on November 23, 1932, son of Peter and Fotini Diamond Arvanitides, and he attended school in Greece. He emigrated to the US in 1952. On March 18, 1953 he entered the US Army. He received the Korean, United Nations and National Defense Service Medals and was honorably discharged on January 7, 1955.

Dino was the owner and operator of Arcade Shoe Repair, then Dino's Shoe Service for 64 years. He was a member of St. Vasilios Greek Orthodox Church and a former member and president of its Church Council. He is a member of both the American Legion Post 61 and VFW Post 1400. He resided in Watertown from 1952 until the couple moved to Alexandria Bay in 2016. He enjoyed fishing, boating, and had a love of the St. Lawrence River. But his greatest love was for his family.

In lieu of flowers donations in his name may be made to St. Vasilios Greek Orthodox Church, 502 Franklin St., Watertown, NY 13601. Online condolences to his family may be posted at www.cummingsfuneral.com.

#9 Tom Doe 2019-07-02 12:28
Dino was a friend to our family through his business. I come from a family with large feet and expensive shoes. We live in Ogdensburg where there are no shoe repair businesses. Everyone in the family came to know Dino for his kind nature and friendliness. Whenever someone was going to Watertown there was a trip to Dino's to either drop off shoes or pick them up. Dino was like no other! My thoughts and prayer go to Dino's wife and family
Report to administrator
#8 Diane Clark 2019-07-02 05:54
My mom was Greek (Stavrakis) and back in Public Square's heyday, she & Mr. Arvan would exchange greetings in Greek, a tradition that he and I continued all my life until he recently retired from his shop.

Condolences to his family.