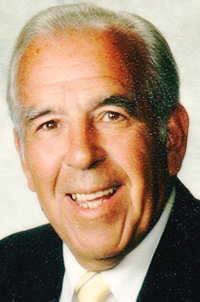 Robert J. Bennison, 81, of Clayton and formerly of Frankfort passed away Wednesday, July 3, at his home.

Calling hours will be held on Monday, July 8, from 5 - 7 PM at Cummings Funeral Service, Inc., Clayton. A prayer service will be at the funeral home on Tuesday, July 9, at 10:15 AM followed by the funeral mass celebrated at St. Mary's Church at 11 AM with Fr. Arthur J. LaBaff, pastor, presiding.

Robert was born in Utica on February 18, 1938, son of James W. and Ina H. Dodge Bennison. He graduated from LaSalle Military Academy, received his B. A. from the University of Notre Dame, and his J. D. from Albany Law School. He married Margaret Mary Goodwin in September 1966 in Frankfort. The marriage was dissolved in 1986.

He was an attorney, practicing in Frankfort, and more recently worked for Christensen's Realty in Clayton. Robert also had served in the Army National Guard.

While in Frankfort he was a communicant and lector at St. Peter and Paul Church and was a member of the Knights of Columbus. He was a member of the NY Bar Assoc., Elks Lodge and was past president of both Kiwanis Club and Mohawk Valley Country Club. Locally, Robert enjoyed volunteering at the Antique Boat Museum and loved all things related to his beloved St. Lawrence River. He enjoyed golf, crossword puzzles, and traveling. He was a devoted fan of the Fighting Irish, especially Notre Dame football.

In lieu of flowers, donations in his name may be made to either Hospice of Jefferson County, 1398 Gotham St., Watertown, NY 13601 or St. Jude Children's Research Hospital, 501 St. Jude Place, Memphis, TN 38105. Online condolences to Robert's family may be posted at www.cummingsfuneral.com.

#8 Bonnie/John Dillenbe 2019-07-08 22:47
Candy, we just heard about your loss tonight, and we are deeply sorry. You've been in our thoughts and prayers and will keep you there. You have our deepest sympathy. If we can help you, just ask.
Report to administrator
#7 Mike and Patti Peck 2019-07-06 16:34
Candy, our hearts are so saddened to learn of Bob’s passing. Please know we are keeping you and the family in our thoughts and prayers.
Report to administrator
#6 Kay Kigress LaPuma 2019-07-06 12:40
Please know how sorry we are for your loss. Bob's boys and Margaret may recognize my name. My husband and I grew up in Frankfort and Bob rented us our very first apartment right after we were married, which was 50 years ago. It was on Litchfield street right up over his law office. He was so good to us and we will never forget his kindness and the fact that we have wonderful memories of living there.He was not only our landlord but he was a true friend. We have had a summer home in Chippewa Bay on the St Lawrence river for over 40 years now and we would run into Bob every so often and talk about our great memories on Litchfield Street.
Again, to Bob's family, we are so very sorry.
Tom and Kay LaPuma

Report to administrator
#5 Mike Evereth 2019-07-05 16:51
So sorry to hear of Bobs sudden passing. Whether it was golfing, fishing or cruises Bob always added to the occasion. You will be sorely missed my friend. Go Irish!
Mike
Report to administrator
#4 Tom and Rena Fox 2019-07-05 12:40
Our heart is filled with sadness to hear we lost such a great fun loving friend! Our condolences to Candy and Bob's sons, our thoughts and prayers are with you. Marco will not be the same without Bob, we will miss him dearly. Rest In Peace my friend! God's speed>
Report to administrator
#3 Carol DeForest 2019-07-05 09:25
My sympathies to Bob's family. The memorial picture of Bob is exactly the way I always remembered him when we worked together at Christenson Realty. He always had such a cheerful attitude. I pray that you will find comfort in knowing God's way is perfect. "In all things God works for the good of those who love him." Romans 8:28
Report to administrator
#2 Deborah Vincent 2019-07-04 16:01
So sorry for your loss. Bob was a great friend and Zumba partner. He will be greatly missed.