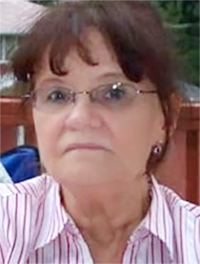 Carol A. Rogers, of Clayton passed away Thursday evening, December 26, 2019, at Samaritan Summit Village, Watertown where she had resided for a short time.

Carol was born in Clayton on May 14, 1943, daughter of Harold and Frances Fraley Ferguson and attended local schools. On April 23, 1960 she married Dennis L. Rogers at the LaFargeville United Methodist Church. For many years she was a seamstress at Ridgeline Industries, Clayton and retired from Sherwood Medical, Watertown. She had attended St. Mary's Church. Carol's family and her cats were her greatest enjoyment.

Along with her husband, Dennis, she is survived by her five children, Christine Thurston and husband Robert, Depauville, Debra Wenk and husband Larry, Adams Center, Diane Spann, Greenville, AL, Kimberley Hayes and husband Jeffrey, Endwell, and Donald Rogers, Rochester; thirteen grandchildren and eight-great grandchildren; three siblings, Clayton Ferguson and wife Patty and Shirley Owens and husband Phil, all of Clayton and Patricia McNeill and husband Glenn, NC; and several nieces, nephews, and cousins. Her son, James Rogers, died before her.

There are no services at this time and arrangements are entrusted with Cummings Funeral Service, Inc., Clayton. In lieu of flowers donations in Carol's name may be made to Jefferson County SPCA, PO Box 531, Watertown, NY 13601. Online condolences to her family may be posted at www.cummingsfuneral.com.