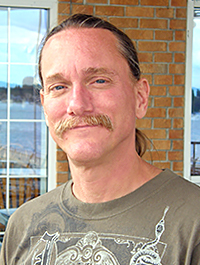 He was born on November 9, 1958 in Brooklyn, son of Jill and Edmund J. Keane, Jr. The family moved to Scarsdale and later to Sackets Harbor then Watertown. He graduated from Watertown High School in 1977 and attended Syracuse University.

Ed was a self-employed electrician and ingenious about fixing things. He worked for Morrison Knudson in Hornell, NY inspecting the wiring on train cars under construction – then to Oakland, California riding the rails to repair Caltrain electric systems. Ed was Manager and later part owner of The Strand where the best musicians in Northern and Central New York regularly performed. He was the band Wirlwind’s first sound man and also held positions at Stature Electric, the City of Watertown, New York Air Brake and Sound Unlimited.

Ed always had something amusing to say. He loved life, his friends, family, and memories of his wife Kathy and their dogs Einstein and Gravity. His family appreciates the friends who loved him for being a kind, intelligent, generous and, as you all know, an irreverent, one of a kind great guy.

Join family and friends at an informal gathering as we remember Ed with love and laughter on Saturday, February 8, beginning at 6:00 PM at the Time Warp Tavern, 302 State St. The family is planning a celebration of his life in July. Arrangements are with Cummings Funeral Service, Inc., and online condolences may be posted at www.cummingsfuneral.com.

#2 Laurie Eselin 2020-02-05 16:50
Such Sad News Ed Was So Young. My heart and prayers go out to his entire family and friends.
He will be missed by un- countable people
RIP ED. You were loved by a lot of people. See you one day on the other side

Report to administrator
#1 Marty Morrison 2020-02-03 09:51
Sean and Kathy, Sorry to learn of your brother's passing. It can't be easy to lose someone so young. I was familiar with Ed and his sense of humor through my work. My deepest condolences to your families.
Report to administrator
Refresh comments list