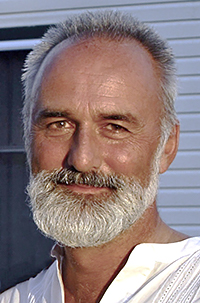 Peter Gerald Keegan of Shelburne Road, Burlington, Vermont passed away suddenly on Saturday, February 1, 2020 in Burlington. Peter was born in Watertown, NY on January 10, 1952 to William and Agnes Flynn Keegan. He received his education at Holy Family School, Immaculate Heart Central and graduated from Oswego State College in 1974.

The majority of Peter’s adult life was spent in Northern Vermont. He was married to Meryl Lebowitz (Tanych) in 1978, which ended in divorce. They had two wonderful sons, Benjamin John and Graham. Peter had worked in the auto industry from salvage to new and used car sales. At the time of his death, he was employed by Freedom Nissan, South Burlington, Vt. He was well thought of by his fellow workers and his gift of gab and story telling allowed him to become one of their best salesmen.

Music was a lifelong passion for Peter. He was a self-taught guitarist and vocalist. His love of music began while singing on the front porch with his brothers. This continued as he sang with "The Young People" at Immaculate Heart Central, "The State Singers" at Oswego State University, and many local theatre performances. He and his brothers raised their voices in song at too many to count family gatherings.

Arrangements have been entrusted to the Cummings Funeral Home, Watertown, NY. A memorial service will be scheduled sometime this summer to celebrate Peter’s life. Memorial gifts in Peter’s name may be made to Lyric Theater Company, 7 Green Tree Drive, South Burlington, VT 05403. Online condolences to his family may be posted at www.cummingsfuneral.com.

Report to administrator
#13 Terrance Lydon 2020-02-08 16:30
My spouse and I never had children but, if we did, I would be immensely proud if they were anything like my memory of friend, classmate, teammate and band mate Peter Keegan. To all of Peter's family, please accept my sincere condolences.
-Terry Lydon (IHC Class of '70)
Report to administrator
#12 Rosalind Morgia 2020-02-08 10:37
Sarah and family. We are so sorry for your loss. You are in our prayers at this difficult time. I will always treasure you and your brothers singing in our
Christmas Eve mass at St. Anthony's church.
Such a blessing to have known all of them.
Rosalind and John Morgia
Report to administrator
#11 Joshua Culver 2020-02-07 17:46
Condolences to Peter’s family for their unexpected and devastating loss. I’ve known Peter, or as we call him at Finnigan’s Pub, PK, for almost 10 years. He was a big part of the family environment at Finnigan’s Pub; serving as a mentor and more importantly as a dear friend to many. It has been an honor to have spent so many weekends watching sports together and talking about life with PK. Thank you, PK. Finnigan’s wont be the same without you. You meant a lot to so many and will be remembered fondly and lovingly. Know that there will always be a glass of Maker’s 46 for you, full of ice. Chips are on the house.
Report to administrator
#10 Lane Wuerthele 2020-02-07 17:36
Peter many years ago was one of my customers at an outdoor waterfront bar in Burlington, VT. He was always a great conversationali st. Over the years i got to know him in other contexts, but we often played pool, backgammon, cribbage, or watched a Celtics game or other sporting event together while sharing a cold one. He had the gift of casual but attentive conversation and it came incredibly easy to him. Many will miss him here. I'll always hear him yell "Yeah Baby!" when the C's hit a 3 or someone pockets a tough shot.
Goodbye Pete, Burlington is going to miss you.
Report to administrator
#9 Nic & Marlen Darling 2020-02-07 16:54
We were very sorry to hear of Peter’s passing. Our thoughts and prayers go out to my former neighbors on Boyd Street, the Keegan Family. We had a lot of fun growing up as Boyd Street Bombers. It’s so sad that we have lost 3 of the Bombers in the last 3 months. R.I.P. Peter.......
Report to administrator
#8 Mary Pobedinsky 2020-02-07 13:14
Wonderful guy--I'll never forget how he sang "Elijah Rock" with the Young People. Rock on, Pete!
--Mary Sutton Pobedinsky
Report to administrator
#7 Carmen Dickson 2020-02-07 12:09
Heartfelt sympathy to the Keegan Family. Sarah, I fondly remember Pete from our days at Holy Family. So sorry for your loss. Carmen and Eliot.
Report to administrator
#6 Bob Morgia 2020-02-07 08:48
Our thoughts and prayers once again go out to the Keegan family. Pete was taken to soon but never forgotten.pleas e remember the many good times that were shared with him.
Report to administrator
12
Refresh comments list