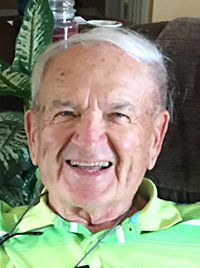 On August 30th, 1975 he married Carolyn Schultz with their families and close friends present aboard a yacht at Conley’s Cove on Sodus Bay, NY.

Ronald retired from General Electric after over 30 years of employment in New York and West Virginia. He then moved to Myrtle Beach, SC for a few years until he returned to his beloved St. Lawrence River in Clayton, NY in 2010. Ronald restored several boats over the years. His prize possession was his houseboat. He enjoyed boating, golfing, horse playing with his grandchildren and collecting lighthouses. He attended River Community Church.

In lieu of flowers, donations in his name may be made to the Alzheimer’s Association, 411 W. Kirkpatrick St., Syracuse, NY 13204. Online condolences to his family may be posted at www.cummingsfuneral.com.

#2 Siera Smith 2020-08-19 03:41
My sincere condolences to the Family of Mr. Marriott. My name is Siera Smith and I worked in Dietary at Samaritan Medical Center where he was a well known patient and was such a kind soul that I’ll never forget. He was so sweet. Every time I had a tray for him I rushed to make sure I was the one to deliver to him any chance I got because Mr Marriott was my favorite and his smile and kindness always made my day! I was heartbroken to see he passed(I remembered his birthday so I had to confirm it was him when looking him up) as he’s always been on my heart. My thoughts and prayers are with you all.
Report to administrator
#1 Anne Houppert 2020-08-17 20:26
Carolyn my thoughts and prayers are with you and your family during this time. We have such beautiful memories of Ron during our many SU bus trips, boating trips on his beloved River and our nights of playing cards with you both. Ron was a great man and will be missed by us. Again my prayers are with you at this time.
Report to administrator
Refresh comments list