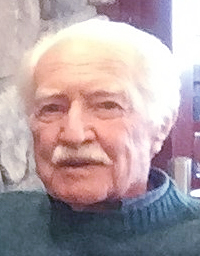 Francis was born in Clayton July 5, 1925, son of Marshall E. "Brick" and Ruth McKinley Farrell and he graduated from Clayton High School, where he was Class President his senior year.

On September 4, 1943 he entered the US Navy. Francis received the American Theater, Asiatic Pacific Theater, and Victory Medals and the Philippine Liberation Ribbon. He was honorably discharged as a Storekeeper First Class on June 12, 1946.

He worked for his father at M. E. Farrell & Son, a plumbing and heating company, started his own business, Farrell's Heating Oils, was a manager at Hanna Fuels, and retired from Bernier & Carr as a Clerk of the Works. Francis was a communicant of St. Mary's Church and lector. He enjoyed running, working out, and kayaking.

The family will receive friends at Neale and Mary Farrell's home, 32519 Co. Rt. 6 (Tibbetts Point Rd.), Cape Vincent Tuesday, July 13, from 6 - 8 PM. The funeral mass will be celebrated on Wednesday, July 14, at 11 AM at St. Mary's Church with Fr. Arthur J. LaBaff presiding followed by burial in St. Mary's Cemetery. Arrangements are entrusted with Cummings Funeral Service, Inc., Clayton and online condolences to Francis' family may be posted at www.cummingsfuneral.com. In lieu of flowers, donations in his name may be made to T.I.E.R.S., P.O. Box 524, Clayton, NY 13624.

12
#20 Cathy Munger 2021-07-18 19:18
My thoughts and prayers are with your family. The last of that great generation from the Guffins Bay shoreline to join the Angels.
Report to administrator
#19 Peter M. Messina 2021-07-18 14:34
It was always a pleasure running into Frances on my way to see my mom Vita at the Summit.... Frances will surely be missed by many .
Report to administrator
#18 Gina Currie 2021-07-15 16:31
Francis was the clerk of the works at the school district in which I work. He was a wonderful man. Always a gentleman, polite, kind and funny. I was also told on many occasions he had the best wife in the world. My condolences to his family. May your hearts always be warmed by his memories. RIP and Godspeed Francis.
Report to administrator
#17 Celeste KLine 2021-07-13 10:36
so sorry for your loss. Going to miss seeing Francis at SSV. he was the so sweet Rest In Peace Francis
Report to administrator
#16 Richard F. Kelly 2021-07-13 09:14
Francis was very much a gentleman. He served as a project manager for Bernier Carr and Associates on a school project in southern New York State where I served as Supt of Schools.
Enjoyed our working relationship which carried on through both our retirements.
He was loved by all in our community.