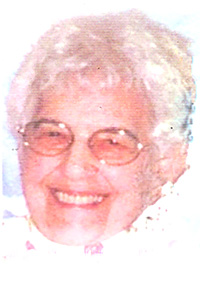 Maria J. Smith, 95, of Watertown passed away Wednesday, August 11, 2021, at Samaritan Summit Village where she had resided since 2016.

Maria was born in Boston, MA June 2, 1926, daughter of Mariana and Josephine (Morello) Tubolino. The family moved to the Watertown area and she was a graduate of Adams Center High School. Marriages to Michael Abbate and Theodore Webb ended in divorce. She married Alfred G. Smith on March 26, 1981 and he died November 23, 2004.

Maria had worked as a home health aide for  Public Health Nursing Services, Watertown and enjoyed being a homemaker to her family. She was a communicant of Holy Family Church, was a former member of its Folk Group and Choir, and the Legion of Mary Auxiliary. She was also a former member of both the American Legion Post 61 Auxiliary and Eagles Aerie 782. Maria enjoyed singing and music, knitting and crocheting, cooking, and especially spending time with her children and their families.

A mass will be celebrated in September at a time and date to be announced. Arrangements are entrusted with Cummings Funeral Service, Inc., Watertown and online condolences to her family may be posted www.cummingsfuneral.com. In lieu of flowers, donations in Maria's name may be made to Holy Family Church, 129 Winthrop St., Watertown, NY 13601.

#8 Irma Whitham 2021-08-23 09:19
May Maria rest easy. Sending hugs to the family.
Report to administrator
#7 Edwin S Abbate 2021-08-16 17:07
God bless you Aunt Maria ,
Report to administrator
#6 Howard &Janice Yott 2021-08-15 20:10
Dear John,Mike and Steve, cousins, so sorry to hear of your Dear sweet moms passing. We loved Aunt Marie so much and loved hearing her sing to Howard on phone, and that beautiful smile she always gave us. Aunt Marie was a beautiful Angel of a soul and a loving Godmother to Howard. She was loved by all that met her and will be missed so much. Rest easy Aunt Marie. Heaven gained an Angel this week.
Report to administrator
#5 Howard and Janice Yo 2021-08-15 20:00
dear John, Mike and Steve, cousins we are so sorry for the loss of your sweet mom, dear Aunt Marie. We will miss her sweet laugh, her beautiful smile, singing to Howard and above all being the best Godmother Howard could ever have!! As Howards wiife I am honored to have known Aunt Marie and have never met such an Angel of a woman in my lifetime. Rest easy now Aunt Marie. You are loved and missed very much.
Report to administrator
#4 Amy Powell roshia 2021-08-15 10:15
John the girls and I are thinking about you uncle webby special place with the angels for your mama. We love you Our condolences to the Smith kids also
Report to administrator
#3 Jayme Spearnock 2021-08-15 00:14
Johnny, Mikey and Steve,
I’m sure going to miss my special Aunt Marie! She had
such a great love for her family and friends. She
was so proud of her kids! And Johnny, what an amazing
son you’ve always been! I know she’s in Heaven and
God has a special place for her.

Report to administrator
#2 Debby crescent 2021-08-14 22:56
She was always wonderful to me, and I would love to hear all the Italian stories she would talk about with her children especially Carmela and her other family , she will be missed and I cherish the happy memories I have of her and all her family, love you Maria, prayers Debby
Report to administrator
#1 Don Tubolino 2021-08-14 10:01
I will miss calling my wonderful Aunt Marie.
Sorry my cousins.
RIP Aunt Marie.