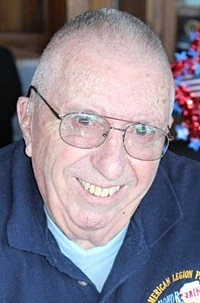 He was born in Elizabeth, NJ on June 1, 1928, son of August and Mary Guarino Williams. Robert was a graduate of Westfield High School, Westfield, NJ and attended one year at Champlain College, Plattsburg.

Robert was a machinist for Elastic-Stop Nut, Union, NJ for 25 years. After moving to the Clayton area, he was a machinist at Frink Sno-Plow for 12 years, retiring in 1976. He had been a member of St. Mary's Church and was currently a member of River Community Church. He was a member of the Knights of Columbus Council 350, the Clayton Lions Club, and the American Legion Colon-Couch Post 821. Robert had participated in the Clayton American Legion Honor Flight. The couple had enjoyed wintering in Winter Haven, FL for several years.

A celebration of Robert's Life will take place at his family's convenience. Arrangements are entrusted with Cummings Funeral Service, Inc., Clayton and online condolences to his family may be posted at www.cummingsfuneral.com. In lieu of flowers donations in his name may be made to Hospice of Jefferson County, 1398 Gotham St., Watertown, NY 13601.